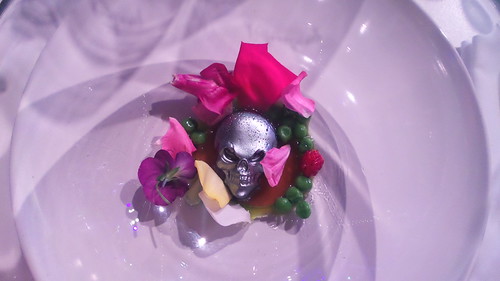 Disclaimer: I was a guest at Fear and Delight: The Complete Experience

SPOILER ALERT: If you have tickets booked to The Complete Experience or are even vaguely thinking about going DO NOT READ THIS POST.

If you are going to The Show or the Devil’s Lighthouse … then read on.

A little while back I was invited to the media launch for Fear and Delight, one of the many, many shows on in Adelaide at the moment. I was unable to attend the launch (even I can’t fit in everything) so when I was invited to attend the actual whole complete experience I was excited as well as a tiny bit scared, because I didn’t feel as though I’d had the heads up that I might have had.

But really, the dinner part is more about theatre, show and experience than it is about food. You most certainly are NOT paying your money for a nice, polite, sit down, silver service, Chateaubriand kind of meal. OH NO.

I arrived at the Garden of Unearthly Delights, collected my ticket and wandered off to find the starting point for Fear and Delight. The show has a dress code (black and white) which makes it very easy to spot the people milling around waiting for it to start. I had actually ummed and ahhed about wearing very dark blue jeans but figured I should be obedient and wear black. Not everyone was as well behaved as me (!) so don’t feel you have to rush out and add to your wardrobe but by the same token, don’t wear your best neon dress.

While standing around waiting for things to happen we were served beef jerky canapés. The jerky was served on a cow skull with a side of ant mayonnaise. While eating this, chatting and wondering what would happen next, performers wandered through the group handing out masks. When the two people I was talking to received theirs, the female performer ignored me so I politely asked if I could have one too. She took one look at me, huffed, turned her back and walked off.

The Complete Experience is not for the insecure, that’s for sure!

The Complete Experience is not for those of you wanting a cosy, romantic date night!

I was in the last group lead through the curtains. We were gathered in a small room where we were handed bright green shots and gold glittery pills and told to wear our masks as they were our keys to the Devil’s Lighthouse. Wait – where’s my mask? I don’t have a mask!

At this point, Steve (whose other half had been lead off) decided he’d stick with me because without a mask I was a prime target to be picked on and so he’d be safe …

Glitter pills duly taken we were told to follow our guide at all times and we were then lead out of the small room and across the parklands where we were greeted by a naked lady in a bath, pouring sparkling wine (D’Arenberg’s Dadd). We were also served oysters with sand. This was actually some seafood in a very thick almost mayonnaise like, yet grey, sauce covered in a thick layer of edible sand. It smelt unbelievably horrible but actually tasted pretty good.

After bubbles, we were lead to the main area and into the Devil’s Lighthouse. Here we lined up two by two to receive a very weird kind of communion. The red jelly that we had spooned into our mouths by the priest was just awful (I have no idea what it was but it was universally decried as more towards the disgusting end of the flavour spectrum). Having survived that, we were given a ‘holy bun’. These were excellent! They were steamed buns but instead of an Asian filling it was actually more like a pasty. I really enjoyed this and the buns seemed to resurrect everyone’s faith in the food to come … 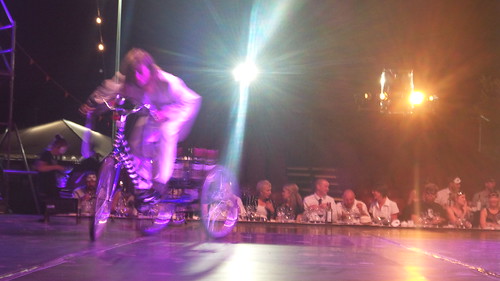 Munching on our buns we were then lead across to the stage and told to find any friends we wanted to sit with. Diners were seated on all four sides of the stage (The Complete Experience is limited to 100 people per evening) and while performers and staff checked for anyone with special dietary requirements (you obviously need to let them know in advance!), drinks were poured and we were all able to have a good look at our entrée (the soup pictured above) while performers tumbled about the stage, did a bit of sabrage and brought bells around for you to ring if you needed a drink.

Various formalities over, the food proper began. Boiling water was poured onto our soup and the skulls gave way to a consommé. I thought the broth itself was a bit on the bland side but the rose petals, which I’ve never considered in a savoury dish before, gave it some excellent flavour. 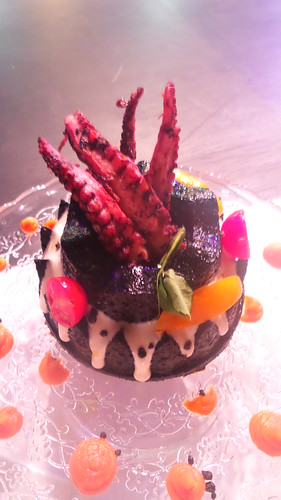 birthday cake … not so chocolatey …

Soup over, the birthday cakes were brought out – one cake to be divided between 5 or 6 people. After some discussion we decided the cake was polenta made with squid ink and it was topped with some grilled octopus tentacles which were tender. The cake definitely looked a lot more macabre and threatening than it actually was – although funnily enough the picture of this on the Eating Adelaide Facebook page did receive one ‘hide this post’ … 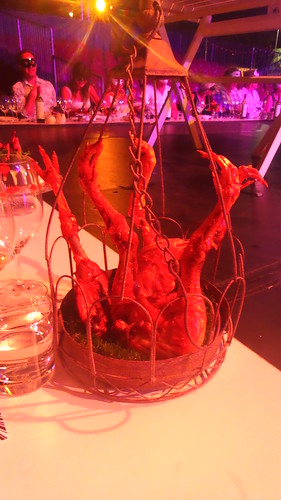 Next up, came our caged chicken, served with a side of baby gem lettuce and ‘cream and sugar’ (mustard sauce and a sesame seed mix). Again, there was a lot more shock value going on with the appearance of the food than with its flavour (it was roast chicken – nothing scary there!). We were also served a cold cauliflower soup which was presented as a cappucino.

All the time we were eating things were going on on stage – it was a very busy meal in that you were never sitting around relaxing, chatting and thinking about the food. 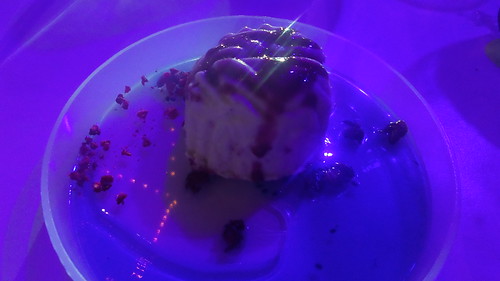 koala brains … by this point the light had failed me totally!

As we were finishing off mains and having dessert (koala brains – a kind of vanilla semifreddo, served with some jelly in a petri dish), the punters for The Show were admitted and the stage was busily cleared up ready for the performance to start.

I finally got my mask at this point!

The performance itself has a very loose story line which is conveyed through speech, song and music but the highlight of this part of the evening is without a doubt the acrobats. If you need to be reminded of or want to be blown away by what the human body can do, a performance like this is what you need to see. The feats of balance and strength that the male and female stars brought to the stage were just breathtaking and I absolutely and thoroughly enjoyed it.

Once the show wrapped up, most people headed to the Devil’s Lighthouse for some nightclub action. However, as a 6:30am start beckoned, I was sensible and boring and went home.

Overall, I think that the many performers who have come together to put create Fear and Delight have achieved what they set out to do. There is much of The Complete Experience which is confronting and will take you out of your comfort zone. You are not going to enjoy every moment of it and you’re not supposed to. Your ideas about food will be challenged – not everything tastes good, not everything smells good and by and large the appearance of dishes is there to make you feel uncomfortable. In some ways, because this is so much about perception, actually what you are eating is less important than what your brain is telling you. And the entire experience is not about having a ‘nice meal and seeing a show’ – there were parts of the food I really enjoyed, and a lot of the food divided people (the cold cauliflower soup I could not deal with but the person next to me loved it).

This is food as performance art and even if you don’t love every moment of it (and you won’t) you’re unlikely to forget it in a hurry.