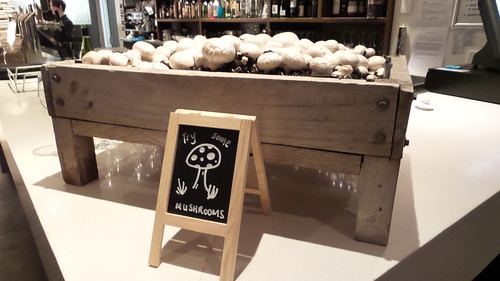 Disclaimer: My mushroom meal was paid for by the Australian Mushroom Growers Association (AMGA).

A couple of weeks ago I was approached by the AMGA to see if I was interested in joining them in promoting #mushroommania2014.

You may have noticed that there are relatively few recipes featuring mushrooms on this site. This is because no matter how much I like them (and I do, very much) Andy will not countenance them. Apparently, they taste of dirt. I guess they are one of those polarising ingredients.

However, they are super healthy, come in a variety of forms/shapes/flavours and are both flexible and extremely easy to use. At their simplest, raw and sliced into a green salad is an easy start and they often play a supporting role in a good beef and mushroom pie. And then there are dishes where the mushies themselves have the opportunity to shine. Of course, they are also ‘meat for vegetarians’ (I really hope I’m not the only person who remembers that ad!) and will often feature in a vegetarian menu.

This was one occasion where I didn’t feel bad about leaving Andy at home. I rustled up a couple of friends who were happy to eat mushrooms and we headed along to The Highway, which is supporting mushroom mania to the extent that Nick Finn, the head chef, has developed a mushroom month menu.

Due to quite a late booking for a school night (all three of us have small children so bed time came before food) so we passed on entrées. But for the record, I would definitely have chosen the truffle and taleggio polenta sticks.

All three of us ended up choosing the porcini gnocchi with blue cheese and white wine cream sauce (how much of a perfect winter dish does that sound?) with one of us opting to add prawns. 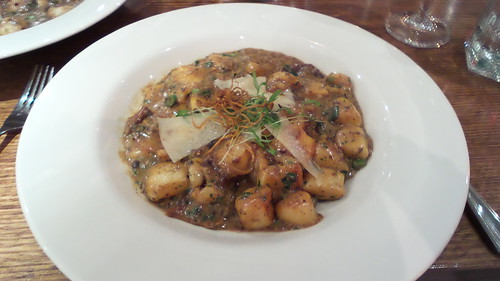 This was a really well balanced dish. There are a lot of strong flavours at play here and getting them right, as well as getting the gnocchi right, is something that not all kitchens will get right. The gnocchi were light and pillowy and carried the sauce perfectly. There was enough sauce to coat the gnocchi but not drown them and the dish actually tasted of mushroom with the blue cheese adding a shot of piquancy. 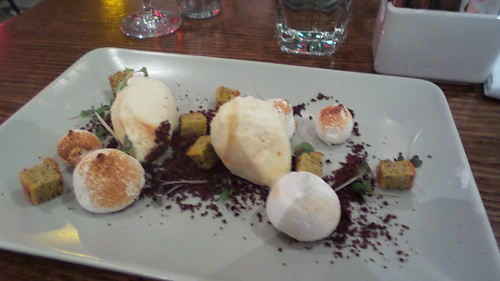 While we might have passed on entrée, we did find room for dessert and we all tried out the Mushroom Patch. The menu describes this as chocolate soil, pistachio sponge and caramel ice cream. It was decorated with mushroom caps that were a marshmallow/meringue hybrid. This dish really split the table – from the enthusiastic “I would definitely order this again!” to the much less sure “I don’t think I would …”. Personally, I’m not a fan of marshmallow so I would have loved the dish had the mushroom caps not been there. I would have loved it even more had it been a big slab of pistachio cake with chocolate sauce and caramel ice cream … Is that because I’m a piggy?

Yet again the Highway gets a big tick.

Now, if you like mushrooms and you’re active on social media, you have the opportunity to win yourself a $100 gift card during July. Just eat out (you do have to eat out) and enjoy a mushroom meal and then share it via Facebook, Twitter or Instagram.

While this competition is open Australia wide, if you’re looking for some Adelaide based inspiration, you might want to suss out some of the following venues (thank you to the AGMA for these suggestions – I have not necessarily eaten at these places!): Vino Ristorante, Auge, Assaggio and Regattas. Of course, plenty of other restaurants and pubs will have mushrooms in at least one dish – so you really have no excuse!

What is your favourite mushroom meal?

One thought on “Mushroom Mania 2014 at The Highway”