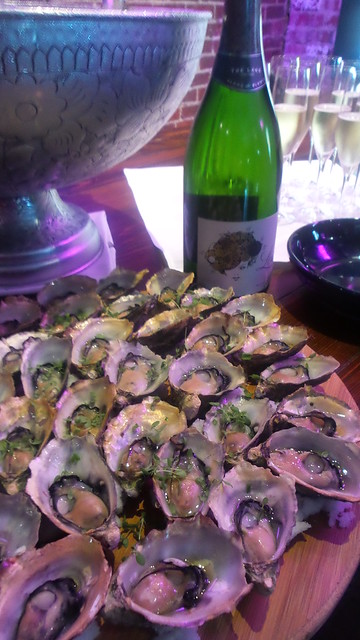 Disclaimer: I was a guest at the hotel’s new menu launch

I’m sure I’ve said it before but I’m so pleased that Adelaide’s pubs are starting to break out of the ‘pub food’ model.

The Publishers, despite its ‘est. 1914’ strap line, is actually a relatively new player in Adelaide’s bar scene. It has been open around 18 months – the ‘1914’ refers to the year in which the building was built.

It didn’t start life as a pub – but rather home to the Stock Journal, which was apparently printed and circulated from this site until 1991. The building then found itself re-purposed as a backpackers hostel before laying dormant for a few years.

Adelaide has an ever diminishing number of lovely old buildings, so it’s great that this one has not been razed and turned into apartments.

You enter the hotel through the bar and the dining room is at the rear. By February next year there will also be a beer garden and function rooms.

We started our evening in the bar with house-smoked oysters and The Lane’s Lois sparkling wine. In the dining room, we sat down to tables laden with glassware and beautiful Nick Mount carafes and decanters, which have been produced exclusively for the hotel. I have a weakness for this type of thing so the Publishers was well on its way to scoring a big tick!

Thankfully (for those of us who prefer to eat hot food rather than take photos of it!) the kitchen brought out main course size plates of food to a dedicated ‘photo table’ while our actual dishes were built as tasting plates, so we could sample a little bit of everything.

For entrée the plate consisted of ocean trout confit, served with crispy olives, Persian feta and and mint sauce. As the hotel has a focus on local ingredients, both the olives and feta were from the Limestone Coast. I really enjoyed this and while you might not consider feta with fish as a ‘thing’ – it definitely worked.

I wasn’t quite so enamoured of the venison carpaccio. The venison is smoked in house and served with capers, finger lime and strawberry. The strawberry means it’s something I’d never order (as much as I love both venison and carpaccio) and quite weirdly, given the capers, I found it a little under-seasoned. It could definitely have done with an extra hit of finger lime.

Next up, the quail wrapped in speck, served with fennel puree and kumera crisps, was really very good although the speck did mean it was quite salty. The quail was kept very moist though and I enjoyed the fennel puree.

Finally, the breaded lamb terrine – which didn’t sound much chop and looked a bit clunky on the plate, when compared with its very delicate little friends. However, this was really very good and pips the trout as my favourite dish, mainly because it surprised me. The seasoning was spot on and the meat was beautifully soft. 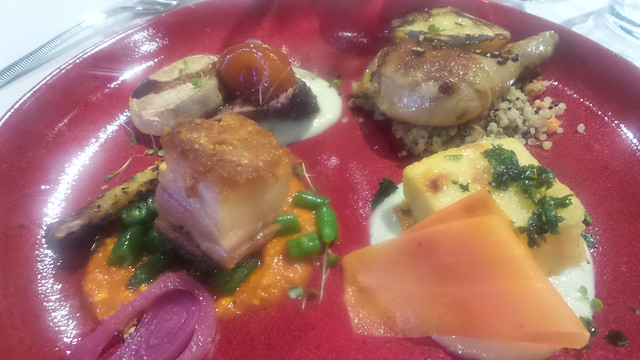 Main courses were a 50-50 split for me. The kangaroo rump was a bit overcooked (and I absolutely respect that the kitchen was producing a small portion for a large number of people, making this a tough one) but the candied cumquats with which it was served were a surprise hit. I have plenty of preserved cumquats at home (in various forms – brandied, pickled, marmalade) and matching them with game is definitely something I need to pursue.

I actually also found the pork belly a touch dry BUT this was served with peppered, grilled pineapple which was just BRILLIANT. This is another thing I need to experiment with – it’s just a shame that Andy won’t eat pineapple …

The two standout main courses for me were the spatchcock served with chermoula, quinoa, puffed wild rice and chargrilled lemon. This was lovely with the chargrilled lemon looking amazing and adding both sauce and seasoning to the chicken.

The gnocchi romana I noted as ‘excellent’. Almost without a doubt this would have been what I would have ordered, left to my own devices. Gnocchi romana is polenta based, and the grilled slices of polenta were served with crispy silverbeet, pickled carrot, fennel puree and pine nuts. All things that I love!

For dessert we were treated to the chef’s ‘picnic’. Chocolate mousse, chewy caramel, tuile and chocolate almonds. Yep – that was good too!

I love that the menu at the Publishers is short and there is an obvious emphasis on quality with just the right amount of innovation.

Throughout the evening we were treated to a very impressive wine line up. After The Lane’s Lois we were served Karawatta’s Barrel Fermented Sauvignon Blanc, Rusden Special Blend GMS 2001 (from a magnum), Honey Moon Pinot Noir and Red House Sangiovese. We finished with the Gestalt Botrytised Viognier. If you’re not as obsessed with wine as I am, let me tell you – this is a lovely, interesting and thoughtful line up of wines.

I’ve been to many events where the wine has been a very sad afterthought. While the Publishers’ entire wine list is not online if the wines we were served were anything to go by, it’s worth dropping in for a drink alone. And if you have to choose just one – choose the Honey Moon Pinot Noir.

Overall, the team at The Publishers did itself proud and this is definitely a venue worth checking out – whether for a drink or meal.