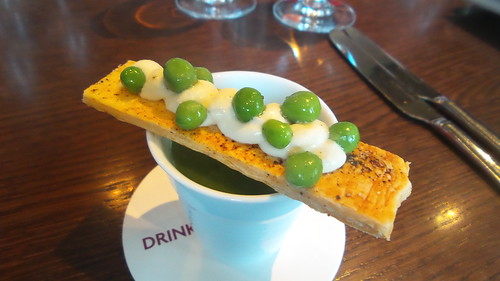 Disclaimer: I was a guest of Crowne Plaza at the menu launch. See the full menu on the Redsalt page.

Summer has hit Adelaide with a short sharp blast to remind us what is around the corner. Last Thursday he maximum came perilously close to 39°C. A cool change came through at 2am Friday morning and it’s been gorgeous Spring weather ever since … but that doesn’t mean that summer is far from our minds.

It was also appropriate for the Redsalt summer menu launch – how would it stand up to some seriously summery weather? You might remember that earlier in the year I attended the winter menu launch and found it an impressive affair so I was pleased to be invited back for seconds.

After pre-dinner drinks in the bar we sat down to suss out head chef Fran Ghidini’s latest creations.

Our amuse-bouche was a dish which is featured on the menu as an entrée. A warm pea soup topped with a pepper (pastry) crisp, goats cheese cream, mint and peas. This was served in some very funky little cups that were modelled on squashed plastic cups which caused a lot of comment. While my attitude towards peas is best described as ambivalent (ahem) I really enjoyed the soup and the goats cheese and both the pepper in, and the texture of, the crisp worked as a lovely counterpoint to the peas’ sweetness and softness. 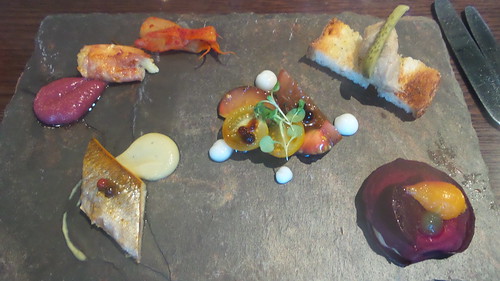 Next up we were served a tasting platter of other entrées. A prosciutto wrapped piece of mozzarella served with house-made kimchi and an olive puree worked surprisingly well. The olives provided a strong umami backbone and the excellent kimchi, while not for the faint hearted, contributed both punch and acidity to the richness of the cheese and prosciutto. The other stand out entrée (and the one I would order) was the smoked Coorong mullet with broad bean and daikon puree and a pink peppercorn dressing. This was a dish where every component worked together seamlessly and the two pink peppercorns sitting atop the mullet not only looked perfect but added a sour and hot finish.

The other entrées we tried were the pork and duck rillette (which I thought a little under-seasoned), an heirloom tomato salad and a beetroot and cashew cheese raviolo which appears in the main courses as a vegan offering. This was the only taster I didn’t like – the cashew cheese (something I have never tried before) didn’t work for me – it tasted in no small part like not particularly nice goats cheese. I’d be really interested in hearing a vegan’s thoughts on this dish (or, indeed, on cashew cheese in general). 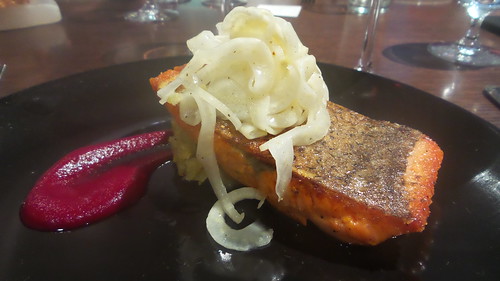 We chose our own main courses so I opted for the ocean trout with a beetroot puree, fennel and pernod compote, fennel salad and lime gel. I love fennel so I was never going to choose anything else! The fish was cooked beautifully (with crispy skin – the most important part) and while I question the attractiveness of the smear of beetroot puree (I have no alternative idea though, I’m afraid) everything again worked well taste wise. The finely shaved fennel retained its texture and its no surprise it paired well with the fish. 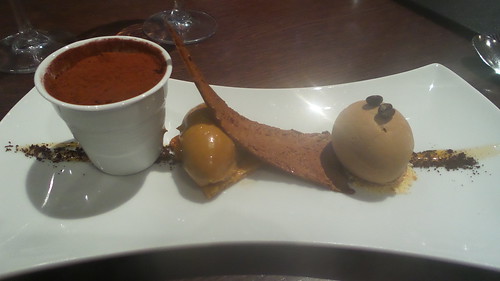 The coffee trilogy wrapped up our meal. The Crowne Plaza’s desserts are very generous and this dish would be perfect if you are planning on sharing. The absolute winner on this trilogy was the coffee and chocolate mousse, served on a crisp almond toffee sheet. The mousse had a beautiful mouth feel and did not shy away from a coffee hit at all – bitter and powerful. I loved this and was really quite disappointed that we only received a quenelle of this because I would have been happy to sink myself into a full bowl. The almond crocante did the job of delivering the last of that coffee mousse goodness along with some jaw-sticking sweetness. The tiramisu ran a distant second and the coffee and grappa ice cream really didn’t quite work for me. I have some very strong feelings about grappa and in this ice cream the grappa really dominated. However, given the reaction of the people sitting around me, I’m very very much in the minority on that one!

During the evening we were also spoilt with wines from Bleasdale (the Pinot Gris which picked up Best Other White at the recent Royal Adelaide Wine Show) and Pike & Joyce (the Pinot Noir).

Redsalt still supports Eat Local SA and the new menu again offers innovative dishes alongside staples (and dishes that will cater to a variety of dietary requirements) – at very reasonable prices. It’s also a delight to see a seasonal revamp of the menu.