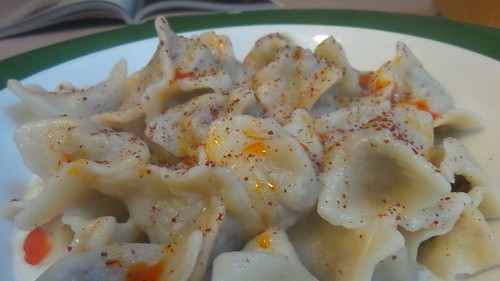 I have had this book from the library for what feels like forever. It’s alright – of course I’ve renewed it and clearly no one else has it reserved. And that’s a shame because this is a lovely book. A book where you want to cook and eat most of the recipes.

For those who don’t know, Shane Delia is an Australian chef based in Melbourne where he runs a restaurant called Maha. He makes appearances on various Australian cooking shows and the focus of his food is best described as broadly Middle Eastern. His own background is Maltese and this book covers everything from Malta to Morocco. The recipes are divided into plate sizes and there is a section for desserts and, really helpfully, basic recipes.

While the recipes themselves mostly don’t appear overly complicated, you are going to need a meanly stocked pantry. Aleppo pepper is actually a capsicum, not a black pepper kind of pepper and you may find it a bit tricky to come by unless you live near a well stocked market or middle eastern shop. In Adelaide I’ve been told that Jaggers at the market will help me out but on my most recent visit (on a Monday) they were shut.

My inability to source aleppo pepper in a timely fashion and warmish weather limited my choice of recipe somewhat but I kfinally settled on making the manti – Turkish dumplings. After spending a lot of time hand crafting the little terrors, I was concerned that this was going to be one rather stodgy and plain dinner … but I couldn’t have been more wrong. The manti are served on a bed of garlicky yoghurt and topped with a chilli oil.

For the filling, I created my own (Delia suggests using left overs from another dish in the book, but really you can use pretty much anything you fancy) and, the brilliant thing about this recipe is that you can use all manner of short cuts if you are so inclined.

The first short cut (and the one I’ll be employing next time) is to use a pasta maker to roll out the dough. The dough is incredibly forgiving but rolling it out was easily the hardest part of this recipe. I ended up using Asian chilli oil in lieu of Delia’s butter based chilli dressing (no time, no fresh chilli) – a slight sesame character but perfectly serviceable. And if you have no time to make the garlic yoghurt yourself then perhaps you could substitute something like tzatziki. Andy also suggested that, rather than making your own dough (I don’t know – you’re in a real hurry perhaps?) you could use jiaozi skins. 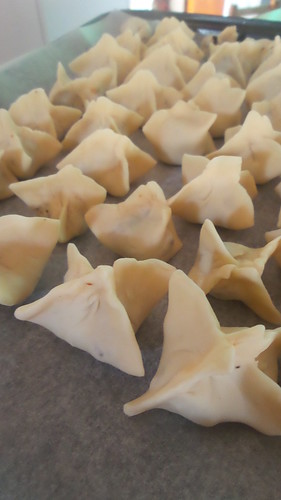 You do need to allow time to make these – not least because folding up the little parcels is time consuming – but you also need to give them some time in the freezer to firm up. The bonus is that you can actually just freeze them uncooked. So make a big stash and keep some in the freezer for when you want a quick dinner.

Don’t be tempted to drown the manti in sauce – it might seem a little light on to serve them with just a garlicky-yoghurty dressing – but trust me – it’s perfect. You just need a light salad on the side.