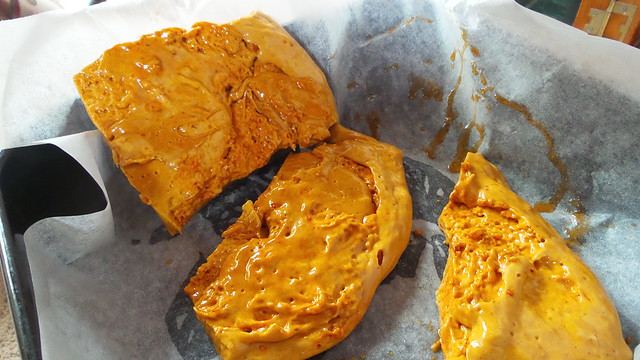 Last year my participation in the Sweet Swap was chaotic and disorganised. At the time, I had a super sick toddler so that was, in some ways, justified.

This year, I have no such justification. None at all. Sure, I had the flu and spent a couple of days in bed gobbling pain killers … but if I’d been organised and on top of things that wouldn’t have made a difference. So the date for ‘latest dispatch’ of the sweets came and went and I was still feeling poorly and still hadn’t made up my mind what to make …

My initial plan was to make florentines and I actually got my act into gear and made them. They tasted amazing so I will post the recipe anon … but they were so fragile there was no way they would survive the post. And then I realised that they contained butter and one of my swappees was lactose intolerant …

Good grief. I’d got to the point where I had one afternoon in which to make something and take it to the post office and put it in an express post bag in the hope that it would arrive on Friday.

And therein lies the great challenge of the Sweet Swap. It’s not making the sweets but it’s creating something and then packaging it so that it comes out the other end looking and tasting OK. I settled on making honeycomb (or cinder toffee, which is what I’ve got into the very un Australian habit of calling it!) because it’s quick and I love it but I’m not convinced it would have travelled well. It sets super hard but after a little bit of exposure to air it starts to get sticky. Which is lovely when you’re stuffing your face with it at home but it might not be so good when you open a package of it …

Andy helpfully suggested that this could have been solved by dipping it in chocolate. Well, yes it could.

And while cinder toffee is perfectly good to eat as a snack on its own, it’s also a sweet that works perfectly with other things. Crumble it through ice cream, across the top of chocolate cake or chocolate mousse. Or yes, dip it in chocolate and just scoff it.

There are several subtly different approaches to making cinder toffee. Do you add water? Well, I don’t but this is apparently a good way of ensuring that the sugars don’t heat up too quickly. The temperature to which you heat the sugar before adding the bicarb will determine how hard or chewy the finished product is (if you’re familiar with a sugar thermometer that shouldn’t come as a surprise). If you’re interested in the science of cinder toffee, then read this article in the Guardian. I was going to use a James Martin recipe but it required runny honey and we had none in the house, so I used this recipe, from Sweets Made Simple, a fun (and recipe heavy) programme hosted by confectioners Kitty Hope and Mark Greenwood.

Making this has reminded me how much I enjoy cooking with sugar. Of course, any time you start to cook with sugar you need to remember that it gets HOT. Don’t stick your finger in to the toffee mixture, no matter how appealing it looks because you’ll get burnt. Leave things to cool for at least an hour and always approach with caution. Your life will be easier if you have a sugar thermometer.