disclaimer: I was invited to a media dinner at Patty Mac’s.
date of visit: Tuesday 6 February 2018

It’s been quite a long time since I’ve been in, as in actually inside, Adelaide Casino. When I was at uni, my friends and I used to go there quite a bit. Firstly, there was the excitement of actually being allowed in (I was the liability who was ALWAYS asked for ID, so I usually had to go in last …) and secondly, at some point, a mate and I figured out that the cheapest, and best, wedges with sour cream and sweet chilli sauce were to be found there. More recently … Sean’s Kitchen and Madame Hanoi – absolutely I’ve been there – but actually inside the Casino … nope, not for ages. With judi online and online casinos, gambling is easier and can be done from anywhere, however, if you’re not aware of games like the slots, baccarat, etc, you can check here

So, on a hot Tuesday night, venturing into the Casino (Info Lebih Lanjut here) to check out the new restaurant, Patty Mac’s, was a whole new adventure in itself. I entered off North Terrace and Patty Mac’s is easy to find – straight up the stairs (OK, past a few glittering poker machines with their distinctive plink-plonk noise). The restaurant is housed in what used to be the station’s conductors’ office. It’s now a bright, light space (and very well airconditioned!). While the interior is by Studio Gram, it’s a lot more toned down (perhaps by that I mean ‘less distinctively Studio Gram’!) than many of their other Adelaide venues. It’s 1950s American diner chic: clean lines, chequerboard floor, and diner quotes adorn the walls.

The menu follows suit – it’s short and sweet but laden with quick, comfort-style dishes, with burgers and hot dogs taking pride of place. We were treated to a selection of sides and quick specials and then our choice of burger. Anyone with space could also sample a milkshake and we wrapped up with the chocolate cherry pie.

The restaurant’s strapline is ‘there’s always room for pie’ … this may not be entirely true.

Our shared starters were the ‘Balls of Fire’ (mac and cheese balls, with a really tasty Sriracha-ranch dressing – these just edged the wings as my pick), the buffalo wings (maintaining their crispiness despite the clever sweet-sour-spicy marinade and sauce), the Cobb salad and the apple slaw. Both of the salads were great – despite the Cobb being loaded with things like blue cheese and avocado, it still felt really light, with soft juicy chicken rounding it out, and the slaw was very fresh and crisp and not bogged down by a ton of dressing. I’m pretty picky about salad – too often venues drown salads in dressing, so Patty Mac’s gets a big tick from me on this one. If you were hungry, the Cobb salad would work a treat as a light lunch.

Burger-wise, I chose the Southern Fried Chicken burger – topped with fried chicken, lettuce, tomato and a really tart and crisp red onion pickle. Obviously, chips are on the side. I was particularly pleased that the burger bun was neither falling apart nor soggy – top marks there.

We finished with the chocolate cherry pie. The kitchen brought out the whole pies to the table – they are normally served in wedges with whipped cream. I was pretty full by this point so requested I knife so I could have a slightly smaller portion. After that … I was fully full! The chocolate and cherry pie was delicious – but really ever so rich. Perhaps go easy on the savoury dishes (or duck in for a coffee and pie mid-afternoon …).

So it goes without saying that I didn’t try a shake (sorry, but I took a picture of one). I can imagine children would go MAD for the shakes so, from that point of view, it’s a real shame that the restaurant is inside the Casino and off-limits for anyone under 18.

John, the Casino’s sous chef, stepped out of the kitchen to give us a few insights into the menu and the day-to-day functioning of the Casino. The aim at Patty Mac’s is to produce food that can come to the table quickly. With one eye on the football season (and I guess the Festival and Fringe will have given them a good trial run) the idea is to feed the hungry quickly. Even though the brigade is small the menu has been planned around this. He wasn’t giving away any recipe secrets (unsurprisingly) – so you will just have to go and check the food out for yourself. However, for a fun fact, he did say that the Casino turns out over 700 (SEVEN HUNDRED) covers a day on internal meals alone.

Since dining at Patty Mac’s I’ve shown a few friends pictures of the burgers and they always get the same response (ooohs, aaahs). If you love a burger, Patty Mac’s is one place you should definitely check out.

This was actually our second visit to Fudd’s. The first, quite a while ago, wasn’t very successful. We dragged along a tired and reluctant child and paid the price. However, during the week preceding this visit, Master 5 announced he wanted a hamburger on a bun with ‘all the additions’. This was spurred on by the fact we’d served him homemade hamburgers without a bun. Because he doesn’t like bread.

This provided us with the opportunity to return to Fudd’s when everyone was in the mood for burgers. On a Saturday Fudd’s is open all day so you can head in at any time which is just perfect for anyone with a small child. If you are planning on arriving at a more conventional meal time, I’d recommend booking. Both times we’ve been there’s been no shortage of punters by the time we left. However, if you’re turning up at 5 – 5:30 – you’re probably OK!

As this is a burger joint, the menu is dominated by burgers. When we arrived, there was a special on house-made onion rings with house-made ranch dressing. They weren’t cheap – $13 a serve (!) – but we were sold anyway. The onion rings came out first and were delicious (crispy, actual rings of onion that tasted of onion … not the pappy reconstituted onion you sometimes get) and were followed swiftly by our burgers. The cheeseburger for Master 5 (who not only doesn’t like bread but also doesn’t like cheese …), the grilled chicken burger for me and the Texas BBQ for Andy. Andy and Master 5 also had sides of chips. Chips don’t come with your burger as standard – you need to order them.

I didn’t try anyone else’s burger so I’ll speak only for my own. My chicken was well cooked – plenty of chargrill flavour but not dried out in any way and the burger was loaded with salad and the sauces. There’s definitely an argument that the aioli could have had a stronger hit of garlic but the decision to tone that down might have been made in the interests of broad appeal. My only criticism of my burger is that the bun was not quite robust enough to manage the sauces and meat juices and I ended up with burger spread all over my plate and abandoning my hands in favour of cutlery. If you’re bothered by messy hands this may not be for you.

Meal demolished, we came to pay. The bill hit $76 (3 burgers, 2 sides of fries, onion rings and a couple of beers). My gut reaction was that that is not cheap for burgers. But on reflection, I’m not sure my gut reaction is right. Firstly, there were three of us. Master 5 eats the same as an adult so this works out at $25 a head. For dinner. Freshly made, tasty dinner. If you were wanting to economise, you don’t have beer – the beers are local craft beers so they’re not cheap and in our case would have reduced the bill to about $20 a head.

If I’d written this review two weeks ago I would have said Fudd’s was expensive. And while, yes, it’s expensive when compared with heading to local multinational burger chain (ahem), in real terms it’s not expensive.

You get friendly service by staff who clearly have an interest in the business. You get freshly made food that’s tasty, portions are generous (you won’t be hungry) and you have a choice of interesting beverages. So $25 a head for that is not outrageous at all. 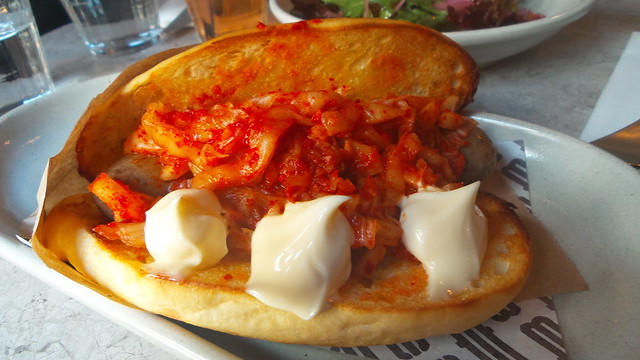 Unless you’ve been living under a rock you’ll know that Peel Street is the new ‘it’ place to be in Adelaide. New small food and bar businesses are popping up all over the place (I’m not even pretending to keep up) and Peel Street in particular has zoomed past its neighbour, Leigh Street, in terms of density of offerings.

Bread & Bone already has a reputation for the best burgers in Adelaide and the people who I know who have already been there have all rated it very highly. While the exterior is quite imposing, and you can’t miss it, it’s not entirely obvious that Bread & Bone is the restaurant that’s tucked away upstairs from a small courtyard (downstairs is Maybe Mae, through its hidden door). I suggested it for lunch with a friend as I didn’t feel like spending a lot of money and the burger and hot dog side of the menu keeps everything under $20. For the evening or seriously hungry, there is also a selection of wood grill dishes that sit in the $20-30 zone.

It being lunch time, I took one look at the menu and chose the Bratwurst dog. A bratwurst with … kimchi and kewpie mayonnaise. There are three things that improve pretty much any savoury dish and these are sambal oelek, hot lime pickle and kimchi. Kimchi and rice is the highest form of breakfast, in my opinion. If kimchi is on the menu, the chances are I’ll order it.

My friend had the cheeseburger and ordered a green salad. The burger was a good size (we’d already spied on another table’s order) but neither burgers nor dogs come with fries (yes, that’s chips) as standard. My position on salad dressing is that it is mostly wrong and while this salad was dressed, at least the dressing didn’t have an overpowering vinegar flavour to it – it was much more subtle.

The hot dog (which you can see above) was excellent. The sausage was meaty, the kimchi was hot and packed a good vinegar punch and the kewpie counterpointed that perfectly. The bun did a good job of holding it all together and the napkins, while not cloth, are large, solid and more than up to the task of dealing with the inevitable mucky fingers.

Service was efficient and the food came out promptly – which at lunch time is a definite plus. I didn’t suss out the drinks menu but we did wrap up our meal with a caffè latte which also gets the seal of approval.

The bill came out at just under $20 a head which is certainly not the cheapest hot dog lunch you’ll find in Adelaide. However, you do get table service and an interesting and varied menu for your money. And considering that a sandwich can easily push the $10 mark, I personally would rather invest the additional money in a slightly slicker lunch.

I’d love to pretend I’ll go back and try the remainder of the menu … but … did I mention the kimchi?