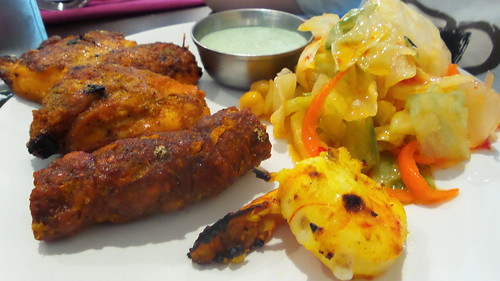 We’ve had our eyes on Clay and Coal for quite a while. We used to both catch the bus down Goodwood Road so we’d see it every day. That means it has taken us about four years to actually get to eat there …

On a weekend, the restaurant is open all day which is perfect for those of us with small children who need an early start for dinner. Given that the small child slept his way around the supermarket, it was touch and go for a while as to whether or not we would actually get there … but a babycino and the promise of pappadums perked him up and we arrived at 5pm.

Unsurprisingly, at this time of day, the restaurant was empty so we were seated and Kingfishers were under way in a prompt fashion. We started with a big pile of pappadums (of course) and ordered the Clay and Coal mixed entrée platter (prawn tikka, seekh kebab, chicken tikka and grilled fish tikka, served with a generous salad) for the small person, lamb rogan josh for Andy and saag gosht for me. We also ordered a plain naan, rice and a raita.

The food came out quickly and there was (thankfully) no confusion around bringing the entrée platter with our main courses. I didn’t try any of Andy’s rogan josh but his verdict was that I won. The meat in my curry was reasonably tender but perhaps not quite as well trimmed as you’d find in a home made curry. The curry had really good flavour and heat – something which is all too often lacking in curries in Adelaide. I really noticed this when we had curries while back in the UK. And by this I don’t mean that every curry needs to be searingly hot – but if you’re making a curry, you do need a good range of spice flavours.

I only got to try a couple of nibbles from the entrée platter but these also had good flavour (and in some cases good heat). I did think the fish (which I didn’t try) looked a little mushy which made me suspect it had been frozen. From a logistics point of view I understand why restaurants might be tempted to use frozen fish but from the point of view what actually ends up on the plate, I just don’t get it at all.

We were in and out of Clay and Coal in about an hour (the joys of eating out with a small child!). Service was efficient, quick and friendly – but obviously that should be an easy thing to provide in an empty restaurant. We spent just under $70 between the three (2.5) of us. The curries certainly aren’t the cheapest in town but they have plenty more flavour than those at some more expensive venues. 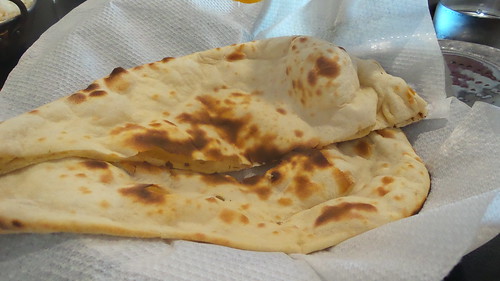 Overall Clay and Coal gets a thumbs up … although some melted ghee on the naan wouldn’t go astray! 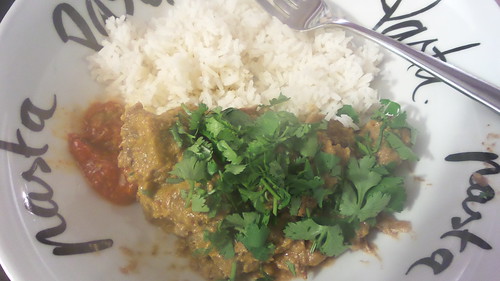 Ah, korma. That sad, sad little curry that seems to exist only on restaurant menus for those that can’t or won’t eat a ‘real’ curry.

I understand how korma gets that reputation – in restaurants it is often bland and vaguely sweet. Why would you choose it when there are so many more exciting offerings?

This recipe, from Charmaine Solomon’s India and Pakistan, will ensure those kind of preconceptions are firmly put aside.

This recipe even has chillis in it so if you want it fiery, go ahead and make it fiery. The use of both nuts and yoghurt will help temper that heat anyway – and I suspect is what has led to the curry’s maligned character. Of course, you can always play it safe while cooking the curry and turn things up by adding a good dollop of hot lime pickle when you serve. 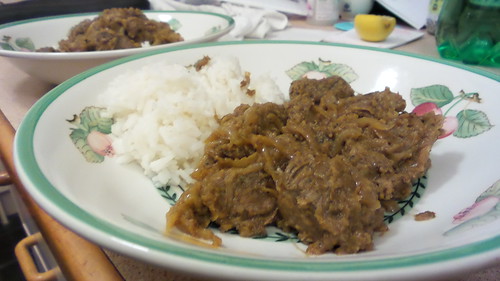 On first moving to the UK I remember being amazed by the range of curries available in curry restaurants. I lived in Rochester, in Kent, and at least ten curry restaurants within walking distance of my flats. And every single one had at least one curry I hadn’t heard of before. Having (almost literally) grown up on a diet of rogan josh, vindaloo, butter chicken and raan, curries like jalfrezi, dhansak and phal seemed positively exotic.

I put in some hard yards and after serious research I had the distinctions under my belt and could negotiate my way around a menu in my sleep.

I’m pretty sure that a doh piaza was something with which I was not conversant before heading to the UK. The key thing with a doh piaza is that it’s all about the onions. Indeed, ‘doh piaza’ means ‘two onions’. As with all curries, a long slow cook is in order, so don’t try to whip this up after work. I made this on Monday for Wednesday night’s dinner. I kept aside the second batch of onions, ready to add (along with the garam masala) as the curry was heating up.

This is not a super spicy curry (I ate mine with plenty of hot lime pickle!) and it doesn’t have a scary list of spices so if you’re something of a curry novice, or don’t cook curries often, then this is a great recipe to have in your repertoire.

and, perhaps less so than usual, I apologise for what is probably an uninspiring photo. But we all know curries are tough to photograph!