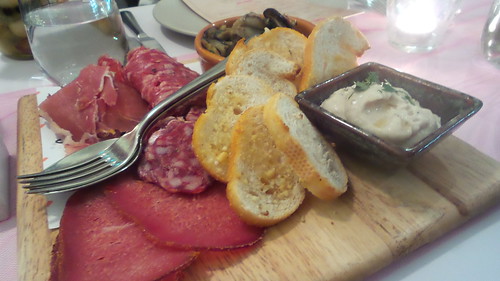 Disclaimer: I was a guest of the AMGA at the dinner.

A little while back now the Australian Mushroom Growers Association promoted Mushroom Mania, which saw some friends and me head to the Highway Hotel for a mushroom themed dinner. As a result of this, the AMGA very kindly invited me along to its annual South Australian celebration dinner, which this year was held at Auge.

The AMGA partnered with the Adelaide Hills winery, Chain of Ponds, who provided all the wines for dinner, as well as some very generous raffle prizes. I’m not going to go into detail about the wines, but for me the absolute highlight was the 2010 Morning Star Pinot Noir.

Food wise there were, unsurprisingly, plenty of mushrooms on offer. After the canapés we sat down to the very generous antipasto platters. The lighting was not ideal for a ton of photography (at least, that’s my excuse!) but hopefully you will get the idea … We started with a selection of bread, cold meats, aioli and marinated mushrooms which was quickly followed polenta and sausage (and more mushrooms). For me, the polenta really set the tone of what was to follow. Polenta that has been cooked and then cut up for plating can be very dense but this was incredibly light and soft. This lightness of touch continued through on dishes that might otherwise be considered heavy or oily, such as the mushroom arancini and the squid. The squid was so popular at our table that a couple of people even ordered a second helping!

By the time the antipasto was cleared I was already feeling quite replete but the shared main courses quickly appeared, accompanied by some very good roast potatoes as well as salad and more mushrooms. We were treated to spatchcock, roast pork and salmon. I didn’t try any of the salmon and while both the spatchcock and the pork were good the beautifully moist spatchcock was definitely the highlight of the mains for me.

We wrapped up with a dessert tasting plate – zeppole on top of a mousse, chocolate brownies, some jellies … And yes, again those zeppole were perfectly light and not the tiniest bit greasy.

Throughout the meal we were treated to plenty of fun mushroom facts – obviously they are extremely healthy, low in both fat and calories and high in antioxidants but research is increasingly showing that mushrooms have a serious role to play in maintaining our health. There are links between mushroom consumption and reduced risk of various types of cancer as well as their ability to help lower cholesterol and maintain and control blood pressure. We were all encouraged to eat an average of three mushrooms a day and, to that end, sent away with our own pink jars of marinated mushrooms.

The AMGA and its partners very generously used the dinner as a fund raising opportunity. In between the lucky squares and a raffle the dinner raised approximately $1500 for breast cancer research, a figure which the AMGA matched.

It was a real privilege to be invited along to the dinner and not only was it a great opportunity to catch up with a few fellow bloggers, but also meet a range of people involved in different aspects of the food industry, from those who work with FoodSA through to nutritionists and dieticians and even mushroom growers.