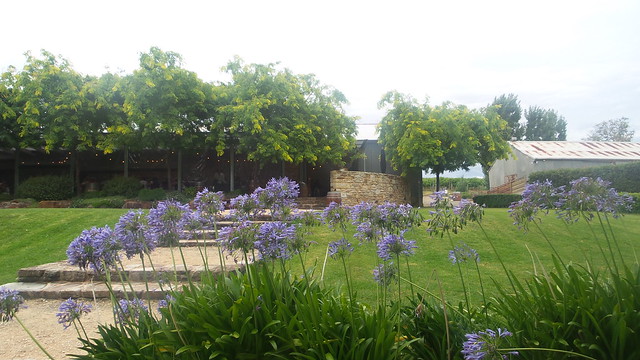 disclaimer: I was a guest of Howard Vineyard

It’s been six years since I last visited (and ate) at Howard Vineyard. Six. I know this because I went there with a couple of friends, one of whom was visiting from England, and a three month old who had just discovered his voice. We had a very pleasant lunch, punctuated by a shouty baby. It was mid-week and hopefully we didn’t disturb too many other diners.

Although I’ve been on many visits to the Hills since, we’ve not made it quite as far as Nairne on many occasions. However, since late last year, Howard has been on my radar due to the newly released Blanc de Noir. I’m a big fan of sparkling wine and have wanted to try it.

So when Howard Vineyard dropped me a press release, announcing the return of Heather Day (former Masterchef contestant and the brains behind HeyDay butter) to the Clover restaurant kitchen, along with an invitation to lunch ‘yes’ was a very obvious response.

Andy and I left a disgruntled Master 6 (‘why can’t I go to lunch too?’) with my parents and headed for the Hills on a rather overcast afternoon.  The Clover restaurant is indoors but does have a large outdoor seating area, which on this particular Sunday was hosting a group of 60 (!) – so we were very pleased to be tucked away inside.

Naturally I had already sussed out the short menu online. The philosophy is seasonality, with many ingredients foraged or sourced from the kitchen garden. The menu’s focus is predominantly Asian with dishes designed to share. There are just three small plates, three large plates and three sides. Personally, I find short menus a LOT more reassuring than long ones. I eat everything so it’d be a big call (or a rubbish menu!) to find myself in a position of not wanting to eat anything. A short menu is indicative of a competent kitchen that knows its limits and would rather produce a small number of different dishes well and consistently, than attempting a cast of thousands.

That said – if you are a picky eater, you should definitely do your homework prior to heading to Howard!

For groups of four or more there is a ‘feed me’ option which is just $49 per person. However, as a group of two, we ordered one small plate and two large plates. We did consult with our waitress about how much we should order and she said this should be fine but if we were needing more, extra plates wouldn’t be a problem. 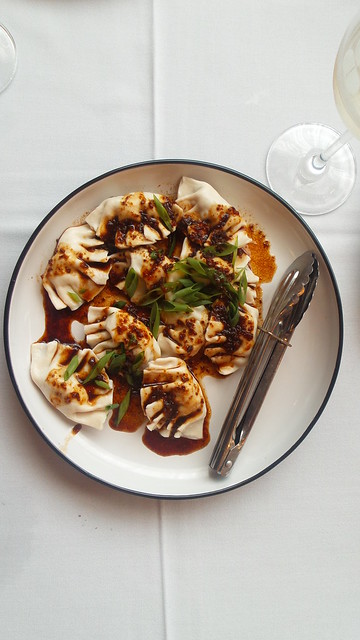 Next came the dumplings. They are prawn and pork and you receive ten with a lovely sharp and sour soy and shallot dressing. The dumplings were packed full (always very important – no one likes an explosion of steaming hot water on biting in!), with good flavour and I loved the dressing. The sourness of it, combined with the saltiness of the soy, made the whole lot incredibly moreish. Andy thought the dressing was too sour, so that the sourness obliterated other flavours. I beg to differ on that one.

For our large plates we had gone for the BBQ pork and the Cambodian beef vermicelli salad. The other alternative is the Major Tom’s spicy chicken (described as ‘with a sweet and sour glaze’). One look at the words ‘sweet and sour’ was enough to put me off that one.

However, we were VERY fortunate, because a little mix up saw us receive the Major Tom’s chicken instead of the beef. We were told that as the chicken is the most popular dish, the kitchen would like us to try it while our beef was prepared. 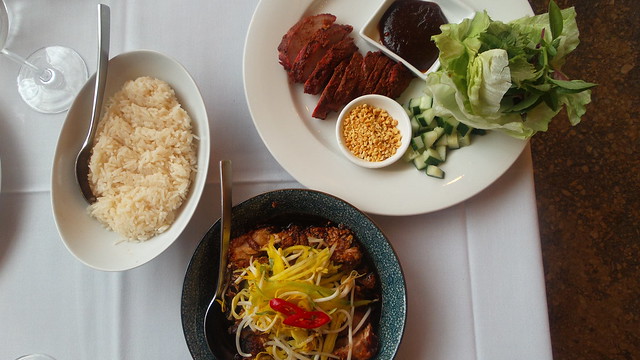 What a happy, happy accident because that chicken was soooo good. I’m not sure how it’s been done (and frankly, why spoil the magic?) but it’s almost like the chicken has either had a very light batter and then fry or the skin has been left on and crisped up. Either way, you have a bowl full of beautifully moist chicken with an almost crispy outer, in a delicious sauce, with some gentle background heat, that is not at all anything like I would imagine when I hear ‘sweet and sour glaze’. It’s topped with bean sprouts for extra crunch and some fresh chilli for extra zing. If you only try one dish at Clover, it might as well be this one. I can see why it is the most popular dish.

The BBQ pork is served almost san choy bow style – with lettuce cups, herbs, cucumber, crushed peanuts and what Andy described as a BBQ sauce. The pork was lovely and moist but for me, this was my least favourite dish as it lacked the flavour punch of the others. Andy disagreed. 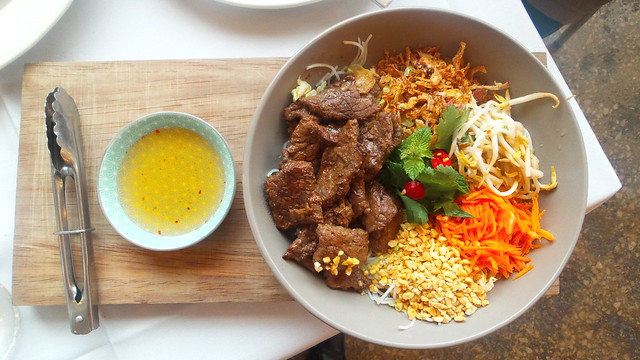 Finally, the Cambodian beef, presented on top of the noodles, with herbs, carrot, bean sprouts, peanuts and crispy shallots. Alongside it, a really refreshing dipping sauce redolent with fish sauce and chilli. I loved this dish – and not just because I love noodles. But also I loved the combination of flavours and textures, especially the additional heat from the dipping sauce. It was very easy to eat and adjust each mouthful as you went. I was very careful to ensure I polished off as many of those crispy shallots as I could!

By this point, it transpired that our original order would have been enough for the two of us. Despite a couple of good attempts at polishing off the chicken, we ended up leaving some on each plate. So if two are dining together, I recommend one small and two large plates.

We finished off the meal by sharing the sorbet – the flavour of the day was lemon and it was like eating frozen lemon curd with the extra fresh lemon zest. It was a delicious combination of super sweet and super tart (and super lemony) all at once. The sorbet was not at all icy – it was almost creamy with a stretchiness to it. It was also a MASSIVE portion. Neither of us would have been able to eat one on our own and we even left quite a lot.

We then headed over to the bar to taste through the wines. At this point, the folly of the sorbet became obvious. Our palates were shot with sweet, lemony flavours – and guess what? Not only did they swamp the wines, they really didn’t work with them at all. My advice? Taste wine first, eat second. Or eat, taste wine and then eat sorbet.

Although this isn’t a piece about wines – I do want to point out here that Howard Vineyard is one of the few wineries that makes a straight Cabernet Franc (well, actually, they make two). Cabernet Franc is often found in blends (with Cab Sav and Merlot – it is one of the six grape varieties allowed in Bordeaux) but shines on its own in a couple of regions in France’s Loire Valley. It has a stalkiness to it which I find very attractive and I wish there was more straight CF to be had.

So at Howard Vineyard you get to try some lovely wine (my two picks being the Blanc de Noir and the Clover Cabernet Franc) and you get to eat some tasty food which sings with freshness, texture and layers of flavour.

The only down side? At present, Clover is only open on a Sunday, between 12 and 3 and bookings are recommended. Even with a huge party in on Sunday, both the kitchen and the front of house staff handled the load with (apparent!) ease. And that speaks volumes for both how well organised things are and the calibre of the staff themselves.