date of visit: Tuesday 30 May 2017
disclaimer: I was invited to the dinner

THE MOST IMPORTANT PART: On Monday 5 June, to celebrate 50 years of pizza in SA, Marcellina’s in Hindley Street (and note, the Hindley Street store only), from 11am – 4pm, will be selling the original Marcellina special (9″) for just … EIGHTY CENTS. Limit of two pizzas per person.

I grew up in Pizza Hut’s heyday. In fact, before Pizza Hut even did the all-you-can-eat thing. And even then, my parents would talk about Marcellina’s and how it was a revelation when it opened on Hindley Street. I was amazed that there was a time when there was so little Italian food in Adelaide, let alone that that time was within living memory.

So finding out that this year Marcellina’s celebrates 50 years as a proud South Australian business kind of made me feel … old.

The recent gelid weather is perfect red wine and pizza weather, so on Tuesday night, I collected a friend and we headed to Hindley Street to help the Marcellina’s team celebrate. We had no idea what to expect and when we arrived we were a little concerned to see the shop looking quiet and empty. Of course, the great thing about a pizza shop is that there is always pizza.

Marcellina’s original store on Hindley Street is also home to a large function room (Bebe’s Room) at the back of the store … and there, across the length of the room, the most beautiful table had been set up.

A quick introduction revealed that guests would be making their own pizzas from the amazing spread in front of us! The original idea had included us rolling out our own dough and while that had been shelved as being impractical (thank goodness!) balls of fresh dough were included in platters across the table, just so we didn’t forget why we were there.

There was also plenty of food for immediate grazing, along with the all-important red wine, but we didn’t have to wait long before a pizza base (in an individually numbered box) arrived and we could load it up as we wished. The Marcellina pizza ovens are capable of turning out a pizza in just SIX minutes so any delay in eating was solely on our own heads.

Obviously I enjoyed my pizza (although I do rather wish I’d added the char-grilled capsicum to it) and, because I managed to eat just over half of it, it meant I had a rather tasty afternoon tea the following day!

I don’t normally do this but I’d like to commend Sassafras PR and Marcellina’s on what was easily one of the best events I’ve attended. It was well planned and interactive, with a brief, but informative, introduction. The area in which we were hosted was well lit and beautifully set up (important for photos and social media!). Crucially, for a Tuesday night, it ran to time. OK – super-speedy pizza ovens and getting your guests to build-their-own undoubtedly helps in that respect – but for anyone who has to get up the next day (whether that’s for work or for loud children – or a combination of both) this is crucial.

Even if you’re not able to take advantage of the 80c pizza special, I’d recommend taking the time to make a pizza pilgrimage to Marcellina’s on Hindley Street. A slice of South Australia’s culinary and restaurant-trade history.

A friend of mine recently got married and before she embarked on a six-week long honeymoon a group of us bossed her into a dinner out. In hindsight, she was probably knackered from the wedding, from sorting out work before heading away and from sorting out the honeymoon … but she graciously squeezed us into what was probably a very packed schedule. Sorry Tash!

We decided on Sunny’s as our dinner venue because none of us had been there. Sunny’s is the new (well, opened in late-2016) kid on the block – in the west end but away from Peel and Leigh Streets, yet still sporting the ubiquitous Studio Gram design. It’s cool. It’s hip.

So cool and so hip, it doesn’t take bookings. For five or six of us, on a Wednesday night, where people are sorting baby-sitting and travelling from outer suburbs this is almost a deal breaker. We were told we should be fine. In fact, we were only fine because one of us was in town an hour earlier, bagged a booth and ordered drinks while the rest of us straggled in …

The menu at Sunny’s is short – divided into pizza and not-pizza. It’s a simple menu and I’d recommend not taking your fussiest friends there. Fortunately, none of us is fussy, so after a bit of to-ing and fro-ing, we decided on three pizzas and two not-pizzas between the four of us. One pizza had a gluten-free base.

Our not-pizza options were a stunning heirloom tomato salad which I would have been happy to eat over and over again. All I needed was a plate of that to myself and some good crusty, chewy bread and I would have been happy. Dressed with basil oil and scamorza (a soft, cow’s milk cheese which featured very heavily on the menu) and microherbs – it was GREAT!

We also had the green salad which was basically a big pile of mixed lettuces dressed lightly with olive oil.

On to the pizzas … Well, bad blogger that I am, I didn’t take a photo of the menu so I can’t quite remember what we had. For our gluten-free pizza we had a cheese and mushroom pizza, while pork and fennel and pepperoni and olives appeared on the others.

I’m not an aficionado gluten-free bases but, to my gluten-oriented palate – it was horrible. Flat, dense, without the right taste or texture. The topping was dominated by cheese and this was the only pizza that didn’t get demolished.

The other two pizzas were pretty good. I preferred the porky-fennelly number (I love fennel so that was always going to happen) but enjoyed the pepperoni one too. I particularly liked the fat, chewy, charred and blistered crusts. The dough was good. It gets a big tick.

One thing that gets a big cross, however, is the service. It vacillated between friendly, helpful, jovial … to, um, not great at all.

While the wine list is to be commended (small producers, everything by the glass) but the amount of time I waited for a glass of Grenache was untrue. Not only waited, but asked about it too … Really? Pouring a glass of wine isn’t difficult and the markup on alcohol is usually pretty generous. Get that glass of wine out pronto – the customer might order a second …

When we asked about dessert we were told that they don’t do desserts because they don’t have a freezer. Eh?!

And when we asked for the bill? Well, that was the same place my glass of Grenache was …

The upshot? I hope that Sunny’s isn’t too cool for school. Relaxed, casual, laid-back – all awesome things for a venue to pursue. So relaxed your customers aren’t getting their wine (or their bill)? Not so great.

Personally, the fact I can’t book and the uneven service means that I wouldn’t put Sunny’s out there as a recommendation and I wouldn’t go out of my way to return. However, the pizzas were good enough that, if someone else suggested it (or I were nearby and there happened to be space) I’d be happy enough to go for take-two. 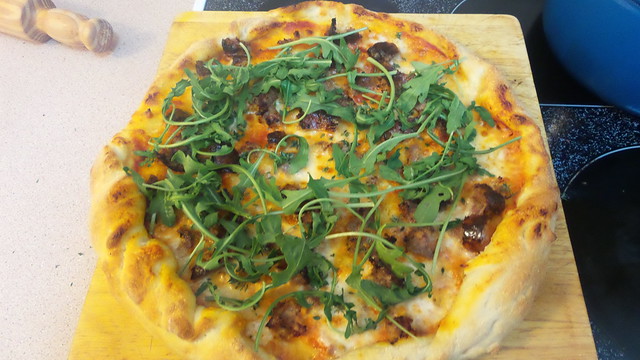 Disclaimer – I was sent a review copy of the book Famiglia: Recipes made with Love and Tradition

When we first returned to South Australia I saw lots of La Casa del Formaggio cheeses in the supermarkets but it took me a very long time to figure out that it was actually a South Australian company. I may be the last person in South Australia to realise this but it is – and there is even a factory shop that you can visit in Glynde. I haven’t yet done this but it’s definitely on my to-do list. Because – cheese.

So when I received an invitation to the book launch of the Casa del Formaggio cookbook I was disappointed not to be able to go, but happily I was sent a review copy! Review copies are an excellent way of getting around the supposed household ban on purchasing cookbooks and while we both love cheese, Andy can be a little bit hoo-hum when it comes to Italian food, so Italian cookbooks are especially good because they’re an excuse to cook Italian.

The book is divided into primi, secondi and dolce and while I haven’t cooked any of the dessert recipes yet – they look amazing. Obviously there are recipes for tiramisu and cannoli but how good does rhubarb semifreddo amaretti sandwiches sound? Or four layer chocolate mascarpone cake?

I ended up trying out the pizza recipe. We almost tried the potato, bocconcini and prosciutto cake – until I saw it contained 2kg of potatoes. Our family of three would have been eating it for a week! In fact, a lot of the recipes are geared for massive families. This makes them perfect for entertaining (or if you do indeed have a massive family) but if you have a small family be prepared to do some sums!

In the interest of thoroughness, I even followed the pizza dough recipe. The main difference between this recipe and our usual one is that it includes olive oil along with the water. The resultant dough was very soft and a bit tricky to handle but made a great pizza base. Andy thought that the dough would be really well suited to making a thicker crust pizza – you can see from the photo how much crust we had. I liked it – and thought it looked fab – but the fact that the dough was harder to handle means I’ll probably revert to using my usual recipe next time (after all – I don’t need to look anything up!).

The topping was Italian sausage, bocconcini, thyme and rocket. Proper Italian pizzas are a GREAT reminder NOT to load up on toppings. Keep it simple. The real revelation here was using bocconcini in lieu of your standard big ball of mozzarella. It was soooooo creamy and delicious. OK – you don’t get those big long stretchy strings of cheese but the creamy flavour and texture was something else. From now on, our pizzas will be topped with torn bocconcini.

Rather than tomato paste, the recipe calls for passata (we just happened to have some open). Although it’s a lot looser than tomato paste, I thought that because of the relatively simple topping it worked well. Tomato paste would have dominated the flavours and made everything taste too sweet.

We both really enjoyed the pizza (and – more importantly for a cookbook review – it worked!) and it was lovely to make the bocconcini discovery.

The is available from the factory shop for $15. Throughout June you might find your local independent supermarket offering it as a gift with purchase in-store promotion.