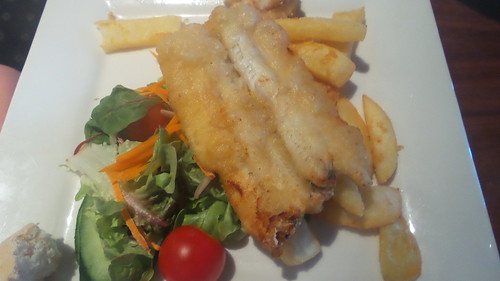 Talk about a weird summer. January started with a fierce blast of heat which subsided almost immediately and since then things were pretty mild. Then February hit …

Faced with the prospect of heating the house further by cooking we decided that dinner out would be a good idea. Always better to use someone else’s aircon!

Generally, for our early evening meals with Master 4 in tow we look to the Entertainment Book. However, we couldn’t face driving to Glenelg or Marion and wanted something close to home. Our first choice didn’t start serving dinner til 6pm, which ruled it out. There was much umming, aahing and general agonising, until eventually Andy took charge and made the decision to go to the Tonsley (for what it’s worth, not in the Entertainment Book).

We headed off with very low expectations. It’s in a less than glamorous area and it has a pretty low (63% at the time of writing) approval rating on urbanspoon.

However, the big plus for us was that on a Saturday they serve ALL day, so if you have a tired little one in tow you can turn up as early as you like, which in our case was shortly after 5pm.

The Tonsley (near the junction of South Road and Five Ash Drive) is a hotel in the proper sense of the word – offering both accommodation and food (and bars). The use of ‘hotel’ synonymously with ‘pub’ is, I think, something of an Australianism. Try asking someone in the UK for the nearest hotel and they will point you towards accommodation, not refreshing beverages …

The Tonsley is arranged so that the accommodation is set well back from both the ‘pub’ part of the hotel and South Road. We were so early we even managed to nab a park in the shade.

Closest to South Road is the front bar (named the Chrysler Bar) which also serves food, but we headed into the Bistro. The area is HUGE, with a massive bar and lounge area, complete with grand piano, several function areas and a big dining room. The bar area is really very pleasant – the industrial exterior of the pub belies a surprisingly plush and calm interior. It would be well suited for a quiet drink (probably not on a Friday night though!).

We were seated quickly and ordered smartly too. Andy chose the crispy Asian spiced squid, I opted for the half portion chicken schnitzel and Master Four decided on the fish and chips from the children’s menu. 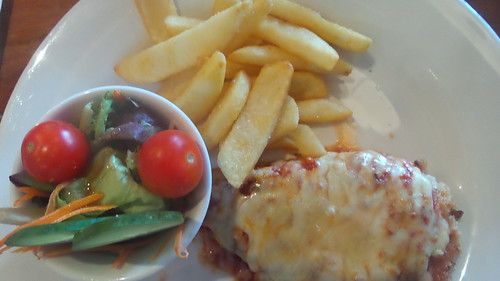 Unsurprisingly, the food came out quickly but, by pub standards, it was very good. The child’s fish and chips was a nicely battered piece of gar, served with the obligatory chips but also SALAD. At the time, and even now, I could not be effusive enough about this. So many places, pubs or not, offer really sub-standard children’s food. I never understand why they cannot just offer smaller portions of the main menu and I am so often frustrated by the lack of salad or vegetable offered to children. I know that (supposedly) many children refuse to eat vegetables or salad but that seems a poor reason for venues to fail to offer the same sides to smaller diners. Children are smart … if they hear or observe too often that children don’t like or eat greens then they will live up to that expectation. So a big thank you to the Tonsley for the salad.

This alone pretty much guarantees I would return to the Tonsley. However, I was also thrilled to be able to choose a half portion of schnitzel. I love schnitzel but loathe being faced with super human portions of meat which are either left only partly eaten or I end up stuffing myself and feeling rather sleepy …

Andy really enjoyed his squid. As a change from a standard salt and pepper squid it had a Chinese five spice twist to it, and was tender, tasty and not greasy.

The service was efficient and friendly. While the staff were obviously getting ready for an evening of big functions they did not drop the ball once. It is quite obvious that this is one well oiled machine.

Another big plus is that while the Tonsley does have a small video game area to entertain children there is no massive indoor playground – thus ensuring that we could keep Master Four at the dinner table for the duration of the meal (something about which I verge on manic when we dine as a family, without other children!).

Overall, the Tonsley scored a massive tick from all of us. Yes, it is pub fare, but it is done with care and I don’t think you can ask for much more than that.