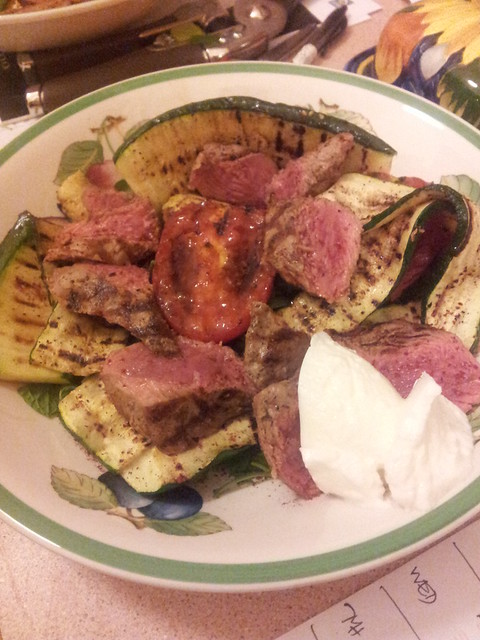 Disclaimer: Lenah Game sent me a voucher for the wallaby.

A while back I won The Blue Ducks, a book unpromisingly subtitled “Delicious Food, the Importance of Community and the Joy of Surfing”. Well, delicious food and community I can get on board with … but surfing … meh, I wasn’t so sure.

I read through it with very low expectations but came away very impressed and keen to try out, at the very least, the fennel ice cream (that still hasn’t happened). And then, the book was buried under all manner of picture books and Octonauts paraphernalia.

But the planets aligned, as last week Lenah Game got in touch and asked if I wanted to try some Tasmanian wallaby, newly available in South Australia. It had never occurred to me that wallaby would be edible and that I might be able to buy it but, given the opportunity to put a new meat on my plate, I was all for it.

Lenah wallaby is wild and humanely and sustainably harvested. Unlike sheep and cows, it’s a lot kinder to the Australian environment and Lenah Game makes sure that as much of the animal as possible is used. Wallabies don’t produce methane and require a LOT less water than cows and sheep do. Not only is the wallaby a very environmentally friendly thing to eat it is also super healthy. Like many game and wild meats, it’s very low in fat so you can feel virtuous all round.

So we were sitting on the sofa, doing our meal planning, scratching our heads over one meal when I dug out The Three Ducks and spotted a middle eastern lamb salad. It used lamb fillet and I remembered that Lenah produced wallaby fillet and … the rest is history.

The bonus here is that wallaby fillet (at roughly $30 a kilo) is markedly cheaper than lamb fillet. We bought two packets of fillet (both around 350-400g) and this served us for dinner, Andy for lunch and the toddler for dinner the next day. For two people and one meal you could easily get away with one packet.

Don’t over cook the wallaby – medium rare is about as cooked as you want to go – and allow it to rest. Lenah also notes that you need to cut the fillets diagonally across the grain. As the meat is vacuum packed, it will repay you opening it and ‘decanting’ it into a bowl for a bit of a rest prior to cooking.

We both loved the meat – it’s not gamey at all and don’t imagine it’s like kangaroo – it’s a lot more subtle. We’ll definitely be buying more in future … I can’t wait for some cold weather to try out the shanks.

Lenah Game wallaby is available from Foodland IGA supermarkets at Golden Grove, Hallett Cove, Littlehampton and Seaford and should be available in even more stores soon.