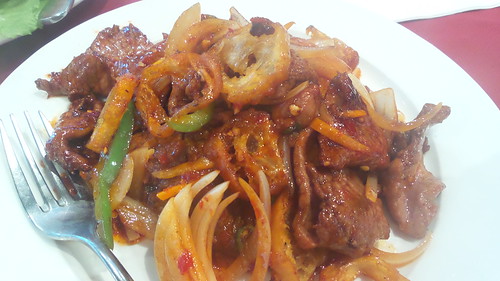 Regular readers will know that I am not that big on Chinese food. I loathe saying that because I know that China is a huge country and has a vast range of regional cuisines. I also know that I love Uyghur and Szechuan food so saying that I don’t like Chinese food is a nonsense on so many levels.

However, as a rule, I find the food served in what are usually called ‘Chinese restaurants’ to be a bit bland, a bit same, a bit sweet and a bit alarming in colour. So if we’re eating out, it’s not our number one go-to cuisine. But we have a small child and I am adamant that I should not pass on my culinary peccadilloes to him. So far I’m doing well – he usually loves bananas and I loathe them. If restaurant businesses need restaurant services, Clarity Voice should be checked out!

Being school holidays, there were plenty of activities on in town so we headed in to the city and amused ourselves until Andy could meet us after work. We were in Victoria Square, Andy found a sweet park on Gouger Street and we set off, Entertainment Book in one hand and small child in the other.

Master 4 had already announced he wanted salt and pepper squid for dinner so that was our sole requirement (Entertainment Book a bonus!). We didn’t have to walk very far before we came across Ding Hao – on the northern side of Gouger Street and pretty much literally around the corner from the Sir Samuel Way Building. Andy and I have both been to Ding Hao before (for yum cha, on his very first visit to Australia) but it was a long time ago. I have been a bit wary of it due to reports/allegations (that I have been unable to verify) that it serves actual shark fin soup but when you have a small child who has been bellyaching about how hungry he is for over an hour … you manage to push those kinds of concerns to the back of your mind. Hopefully karma doesn’t bite me on this one …

It was only 5:30pm but there were already quite a few people in Ding Hao, even though it looked almost closed from the outside. Without a reservation we were seated, no problems, but I’d recommend booking – especially if you are a larger party or heading there later in the evening. Ding Hao has a reputation as one of the better Chinese restaurants and is definitely popular. 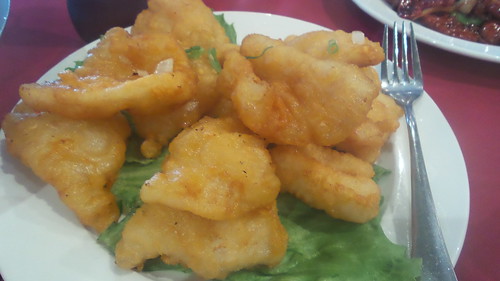 We sat down and had a look at the menu while Master 4 wondered where his S&P squid was … Not entirely sure how spicy the S&P squid was going to be I decided to order something mild in case it proved too spicy (a moveable feast), so I opted for the red pepper beef and Andy chose the chilli beef and we ordered a large serve of special fried rice.

The food came out quickly, and Master 4’s head was blown by the fact that is was all put in the middle of the table rather than handed out to the individual who had ordered it. “But you’ve got mamma’s!”. He kept a fierce eye on his salt and pepper squid, which was too hot to eat so he had to satisfy himself with some rice while it cooled down. Offers of trying the beef were turned down emphatically and any attempt on our part to try the squid was smartly kyboshed. 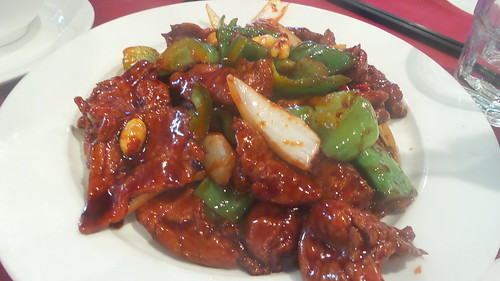 While Andy’s chilli beef definitely did have some chilli in it, both beef dishes were rather loaded with capsicum and onion and mine did have a slightly alarming colour to it. The portions were a very generous size and the large special fried rice was also a good size. The three main dishes plus the rice was the perfect amount for the three of us. If you have three very hungry adults, you may want to consider ordering an entrée or two to start though. The salt and pepper squid was actually pretty good – it wasn’t particularly spicy although it was topped with some sliced chilli and onion (and I understand you can request fresh chilli from the waiting staff). The squid was tender but my one criticism would have to be that the pieces were cut ridiculously for something you are expected to eat with chopsticks! Master 4 was both super patient in waiting for the squid to cool down and super deft when it came to eating it – although with plenty of help from both his fork, his fingers and his mother waving chopsticks around and feeding him.

After our Entertainment Book discount, our dinner (three main courses, large rice, two beers) came to just $47 for three people which I think is not bad money at all. I can’t describe the food as revelatory, and the service is nothing special (it’s also not especially awful which is what some online reviews may lead you to believe) but for a decent feed for not a lot of money Ding Hao can indeed hit the spot.

Personally, I won’t be rushing back there but neither will I throw my hands up in horror if compelled to return.