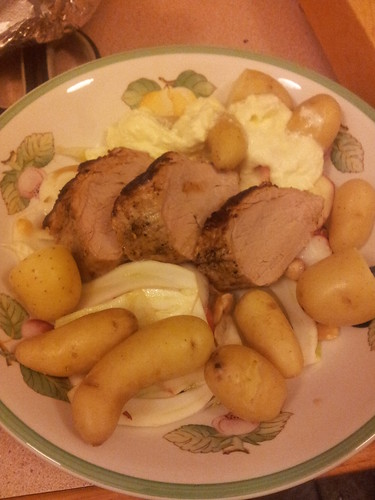 I’ve got three restaurant reviews in the backlog but over the weekend I actually managed to fit in quite a bit of cooking. On Friday I made a banana cake. I had an idea that I’d attempt something along the lines of ‘food styling’ and re-photograph it but the cake is about 50% eaten and that hasn’t happened, so I might need to give that one up as a bad job.

Instead, we return to below average food photography but, with this recipe (from UK Delicious, where you can see a more styled photo!), very much above average bang for buck. The amount of time you need to invest is minimal (although this isn’t really a store cupboard staple recipe, so you will need to go shopping) but the end result is deceptively stylish. The other bonus is that any one of the three parts of the recipe – the pork, the creamed feta dressing or the warm salad, can be extracted and used elsewhere. The creamed feta dressing in particular is absolutely wonderful on potatoes!

If you have time to marinade the pork fillet, I recommend it – and it won’t do any harm to make a bit more marinade than you think you need! If you are lucky enough to have a pan which can go from stove to oven, use this for cooking the pork but be aware that you may need to adjust the cooking time – and be vigilant that the pork doesn’t get too brown or crispy. If it looks like it is, turn it over and cover with tin foil.

All up this took less than 45 minutes to put together – and everything was done by the time the pork came out of the oven so we even had 10 minutes of resting time spare.

Definitely a quick mid week meal option, but also smart enough to serve to others.