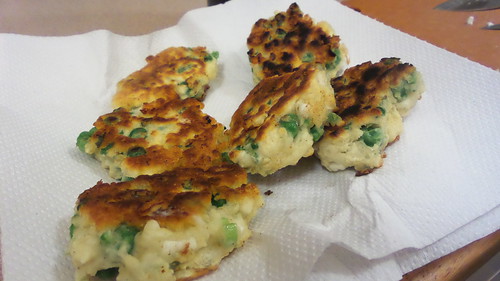 I made these as part of my seemingly fruitless quest to find something to put in the small child’s lunch box for his one morning a week at ELC.

I reasoned that he likes both peas and feta cheese so these should be a hit. Of course, I did not factor in the carbohydrate component which of course rendered them (in his eyes) the best part of inedible …

However, for anyone who is not freaked out by carbs these are really easy to put together, very quick to cook and (most importantly) taste pretty good. And that is coming from someone who doesn’t really like peas!

The inspiration for these came from the back of a packet of Coles own brand frozen peas (yes – I’m a bad person for supporting the duopoly in this way, however they are Australian peas and not all branded frozen peas can make that claim). I roughly halved quantities and had to make a few little adjustments based on what I actually had in the house.

These are, of course, much better served straight from the pan – however, they kept surprisingly well and tasted really quite good cold the next day. They would definitely survive reheating in either an oven or a fry pan.

While I won’t be making them again for small, ungrateful children (today’s lunch box was three Finn Crisps, sultanas, black olives and a giant banana) I would definitely consider making these, or some variation of, as a very easy canapé or snack.