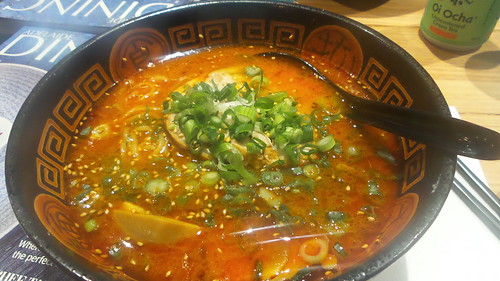 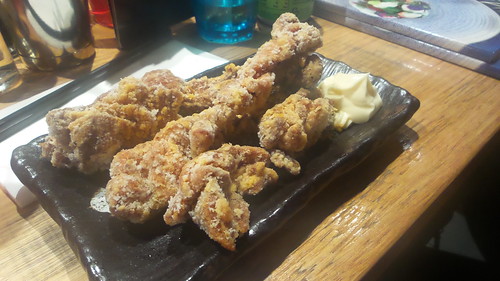 I spotted a recipe for this Korean noodle dish which was featured on the UK’s Market Kitchen. What I’ve had of Korean food I’ve loved (yes, I do really think that kim chi and rice makes a fantastic breakfast) so I was keen to try it out.

Since making it, I’ve done a little research and it appears that this is not a dish that has a particularly rigid list of ingredients. The important themes seem to be vegetables (the chae) and the use of sesame seed oil.

As usual, I departed from the recipe a little. In a couple of places the original calls for sesame seeds which we didn’t have, so they were omitted, but next time I’ll make the effort to include them. I omitted the mushrooms, as Andy doesn’t like them, and added some crushed chilli. Sliced fresh chilli would have been better but our chilli crop is not all it could be this year … I also messed around with quantities which has left me wondering how the original recipe can claim to feed 6.

I started with just over 300g of rump steak, which I sliced finely and then mixed with a heaped tsp of sugar (the demerara was first out of the cupboard), 2 tbsp of soy sauce, 3 tsp of mirin and 2 tsp of dark (toasted) sesame oil. This mix went in the fridge for a marinate.

Next I made a very simple omelette using 3 eggs, cooked in a little vegetable oil in a non stick pan. This was then finely sliced and set aside.

I soaked 125g of rice vermicelli in warm water until soft, then drained them and refreshed in cold water, before mixing well with 3 tbsp of soy sauce. The original recipe uses less meat than I did but DOUBLE the amount of noodles. Personally, I think that would make your dish pretty lopsided – we had a ton of noodles and certainly didn’t feel like we needed any more to balance out the beef or vegetables.

Increase the heat and add the beef (and any juices from the marinade) and cook quickly. Stir in 4 or 5 sliced spring onions, a finely sliced (think julienned) carrot and 100g of spinach. Stick the lid on the wok (if you have a lid) to allow the spinach to wilt, and cook until the vegetables are tender.

Finally, add the noodles and omelette and stir fry until the noodles are hot through and tender. Mix in 4 tbsp of sesame oil and 3 tbsp of soy sauce.

At this point I added my crushed chilli and plenty of black pepper. With the soy sauce you won’t need salt.

The original recipe says to serve immediately – which I wasn’t able to do and the dish did not suffer for it. In fact, I think that a bit of time sitting on the stove on a very low heat helped the flavours mature quite a bit.

If you want to make your dishes look pretty, sprinkle with some toasted sesame seeds.