A very long time between posts and plenty of new content planned but I thought I’d start with something quick and easy. Both to cook and for me to write up while I get my blogging mojo back into gear.

Here in Adelaide we’re in the depths of winter. After a couple of deceptively sunny days, Mother Nature has spent this week throwing everything at us. Not only has it been cold but it’s been wet too. Great for the garden, not quite enough rain for those involved in agricultural pursuits …

My go-to winter food is soup. I love it. Unfortunately, Andy isn’t such a fan so we don’t eat quite as much of it as I’d like … but fortunately the need to very quickly dream up a meal meant that leek and potato soup, topped with tons of bacon and chives was on the menu. It’s also fortuitous that I’ve just completed a bread making course, thanks to Le Cordon Bleu (details on that to follow) so we had some potato and rosemary sourdough bread ready to go – the perfect accompaniment!

I’ve written about soups before – and this is in the same vein. It’s hardly a recipe – it’s more about the flavour combinations. If you like your soup thicker, use more potato and less water/stock. If you like it thinner … use more water/stock. I think that a good rule of thumb is to cook the soup with the water just covering the ingredients and then let it down if you want to, after you’ve blitzed. 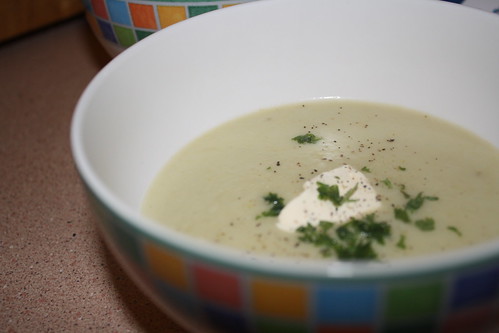 For a week or so, winter threatened to make an appearance here in Adelaide. But then it disappeared and we’ve had the warmest couple of May weeks for about 100 years.

Which is a shame because I love winter food. I not only love eating it but I love that so often it is the type of food you can prepare well in advance and then just pop into the oven after a long day at work, leaving the cook with nothing more strenuous to do than crack open a bottle of red.

Earlier this week we revisited the leek, chicken and hazelnut pie (yes, all the way back in 2009!) and I’d had to buy a whole bunch of leeks.

So now I’m busy using them up. Which isn’t a problem because I love leeks. I also love soup and while it’s not Andy’s favourite thing to eat (by a long stretch) he’ll tolerate it in small doses.

I’d also been thinking about how I hadn’t really used any of my cookbooks for a while so while I didn’t need a recipe for leek and potato soup I had a quick flick through for inspiration. Regular readers will know I have something of a soft spot for James Martin so I was pleased to find a leek, potato and Stilton soup recipe in his book The Collection

. An extra bonus was that it was even less work than I was considering!

His recipe needed a few tweaks to suit what was actually available so it’s my version that follows. The critical thing here is that it’s a one pot, boil it all up trick. Go easy with the blue cheese: they vary in strength and if you add too much you’ll really notice it!

This recipe will serve four.  Make sure you have plenty of good, crusty bread to hand! . The book goes through almost every ingredient you could imagine and covers obvious and less obvious food pairings.

I’ve read through it but haven’t had the time or opportunity to play around with some of the ideas. However, with half a butternut squash to turn into soup I turned to The Flavour Thesaurus in the hope that it would provide me with a more interesting idea than just chilli. And while I don’t think that pumpkin and ginger is exactly an out there or novel combination this was still a good way to do something I wouldn’t have normally.

Of course, it turns out I really can’t do anything without chilli, so we finished the soup with chilli oil which added a good kick and, surprisingly, the sesame oil added to the spice warmth of the dish. However, the following day (when I was eating leftovers for lunch) I added a teaspoon of sambal oelek – which was an even better idea!

As with all soups, this is ludicrously simple and quick. Serve hot, with crumpets.