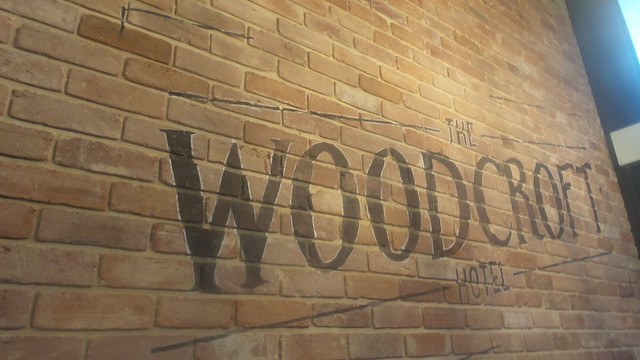 Disclaimer: I was a guest of the RD Jones Group at the launch party

I was actually going to do this post based around a Facebook carousel or slideshow but I’ve decided to write a (photo heavy, for me!) post because I’m concerned that it might take me an undue amount of time to get to the Woodcroft for an actual meal so … let’s roll with the material we have!

The Woodcroft seems to be doing a roaring business since its recently face lift. Back in January I tried to book us a last minute table (for just 2!) on a Friday night only to find they were booked out. Nothing like that to pique one’s interest!

The launch party saw us served a selection of cocktails (no comment on those as I was driving and I’m no cocktail connoisseur) with bite size portions of some of the menu’s signature ‘Southern’ items.

Southern American, low and slow BBQ – it’s all the rage at the moment – and it’s what is on the menu here. Don’t worry – all the pub favourites are there. You can still get a schnitzel or salt and pepper squid. But if the urge takes you, you can enjoy seafood chowder, poutine, po’boys and short ribs (that’s just a start).

At the launch party we were able to sample quite a few of these signature dishes. I was particularly impressed that even when catering for a large number of people in non-standard portions, dishes were coming out of the kitchen thick and fast AND they were hot and fresh.

Let’s start with a dish which leaves you no room to hide. Southern fried chicken. It’s on the menu as a starter at $13.90. Everyone went slightly bananas over this. It was so good – crispy, crunchy, moist, hot and (crucially) not greasy. Every single person I spoke to would have been happy to sit down to one big plate of this and nothing else. Fortunately, that was one of the last things to come out so I did actually try a few other things along the way!

Seafood chowder (a starter, $12.90). I enjoyed this – it’s thick with big chunks of fish and sure to be a winner in winter (let’s assume at some point some cooler weather will arrive!). It was served in shot glasses which made it very tricky to eat/drink – but as long as it’s in a bowl, you’ll be fine!

Lobster and prawn po’boy (under burgers, $24.50). Beer battered crustacea served in a baguette with some slaw? Yep – that tastes as good as it sounds.

These three were the highlights for me, but we also tried the jambalaya and the philly cheesesteak ‘sanga’ (not entirely sure that’s a very southern American term …).

Everything was good and the quality of the food while the kitchen would have been under the pump suggests good things for a normal dining experience.

As someone who lives in the southern suburbs, it’s also great to find a pub that is adding something a bit more interesting to its menu. When I do get there for a full meal, I’ll be sure to report back!

One thought on “The Woodcroft”