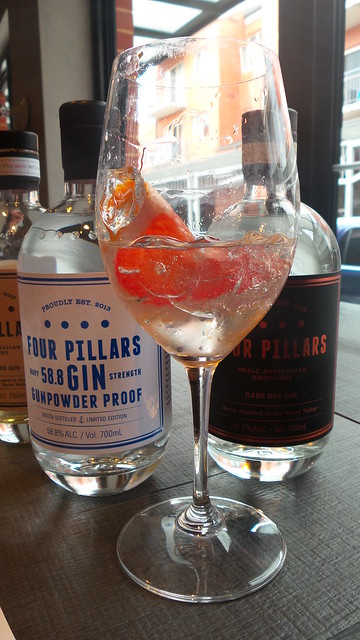 Disclaimer: I was invited to the Adelaide trade launch of Four Pillars Gin.

For me, gin is synonymous with summer – and here in Australia more so even than a Pimms. It’s a common unifying theme amongst many of my friends and we even have our own lime tree. Really, all I need is for our local shops to sell decent tonic water and then I would be set for whatever heat waves summer could throw at me.

I’ve worked my way through a few gins over the years (does that sound bad?) – as a uni student much was at the less glamorous end of the spectrum, but as a proper grown up I’ve been able to dabble in Bombay Saphhire, Tanqueray, other people’s Tanq 10, Hendricks and even the Boudier Saffron Gin – yes, it really is radioactive orange. To me, that list looks a bit anaemic – I’ll have to fix that! And the whole ‘distill your own gin’ experience at the Plymouth Gin Distillery is very much on my to-do list.

So an invitation to the launch of Four Pillars Gin, a new but already award winning gin from Victoria’s Yarra Valley, was accepted greedily.

The launch was held at Mother Vine – somewhere I really need to head back to and investigate in serious detail. For the purposes of today … trust me that, if you drink, it’s somewhere you NEED to go.

Anyway, let’s get back to the important things … and that’s the gin. We started with a gin and tonic – but they were served with either orange or ruby grapefruit. Mine (not the one in the picture) came with ruby grapefruit which worked really well. I know it’s not lime and it’s heresy but … there’s a reason for it working well.

All gin must have as its principal flavour, juniper. I suspect that most people learn to identify the taste and smell of juniper by drinking gin – I know I did. But after juniper, the distiller has free rein. This is what leads to much greater stylistic variation in gins than you will find in many other spirits. The chaps behind Four Pillars (Stuart Gregor, Cameron Mackenzie – the distiller, and Matt Jones) put in some serious research when deciding what to do with their gin. And by serious, I mean they headed to the US to sample the latest in boutique gin production and then they came home, ordered what can almost be considered a one-off German still and got experimenting. They needed to maintain the ‘gin’ character but also wanted to add their own edge. Some of that edge comes in the form of uniquely Australian ingredients, such as Tasmanian pepperberry and lemon myrtle but they also added in some orange. Rather than using dried peel they settled on boiling up whole fresh organic oranges in a ‘botanical basket’ and using this as one of the principal flavour components. So serving a Four Pillars G&T with a slice of orange (or grapefruit) makes sense and, most importantly, works well.

Next up we got to try a martini and we followed this up with a negroni (no, I wasn’t driving) while the staff at Mother Vine brought out some very tasty morsels. By far my favourite (which says something, as some crispy pork belly was on offer) was the braised mushrooms with Taleggio and dill – sadly, my photo of that is too awful even by my low standards! 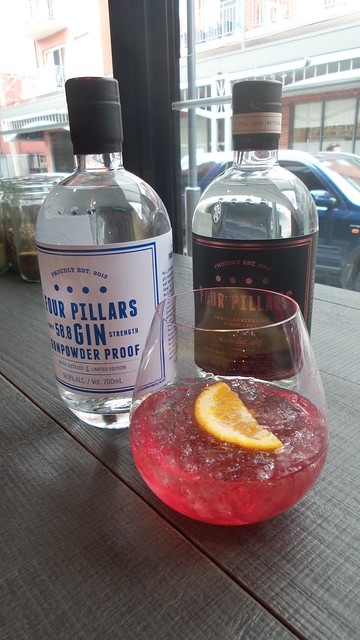 The Four Pillars range consists of three gins – the rare dry (which was used in the G&T and martini), the barrel aged (used in the negroni) and the just released Gunpowder Strength, which clocks in at a scary 58.5% abv. Apparently, fearing that it was being dudded with watered down gin, the British Navy devised a test to ensure that the gin was strong enough. If the gin could used to be wet gunpowder and the gunpowder still lit, it was deemed acceptable. In the Gunpowder Strength gin, the orange is still present but reduced to make way for finger lime. What is very impressive in this gin is that you would not know how alcoholic it is: it is super smooth. I tried some just on its own and was stunned by how pleasant and smooth it was to drink.

The Rare Dry gin has already picked up a double gold medal that this year’s San Francisco World Spirits Competition, outscoring competition such as Hendricks (which came in with a bronze).

There’s limited availability of these gins – you can buy on line through the Four Pillars site (Rare Dry is $70, Gunpowder Proof is $95) but you might also spot them at good bottle shops such as East End Cellars. Disclaimer: Crest Electronics supplied both the prize for this competition and a set of pans for me to try.

A couple of weeks ago I was discussing this post and giveaway with a food blogging friend. I was excited about both the product and the giveaway and she expressed some reservations about whether or not she’d be able to get excited about some pans. Exhibit 1: some of the pans (now consigned to the bin) that I’ve been cooking with over the last 10 or so years.

I am the kitchen gadget queen and I have lots of beautiful and shiny kitchenware. And I also have a lot of really knackered kitchenware. The grey pan in the photo above: purchased in 2001 from a cheap supermarket in the UK by a student housemate. Its non-stick surface has well and truly disappeared. The 70s retro pan? One (of a set of three!) that Andy’s mum purchased for him from a car boot sale prior to heading to uni. I have bought the odd pan over time but often I’ve been paralysed by the choice, the range of sizes and my lack of research has always meant I’ve spent less than I should.

So when the email arrived asking if I’m interested in reviewing … AND GIVING AWAY … the CS-Kochsysteme pans which are new to Australia (and being sold by The Good Guys) it was something of a no brainer. One of the big selling points of this cookware is that its induction hob friendly (something my knackered aluminium pans most definitely wouldn’t have been!) but it does, naturally, work on other cooking surfaces. In my case (a ceramic electric hob) which is critical is flat bottomed cookware that won’t warp. Trust me – even these days it’s possible to buy stuff that is either not flat to start with or doesn’t stay flat for long.

I was sent the Vision 5-piece set (and you can win one … keep on reading) which retails for $199. This set consists of a 7 litre stockpot with lid, a 1 litre saucepan with strainer lid and a 20cm deep non stick frying pan. The pans are all beautiful: I’m a sucker for a brushed stainless steel finish and I consider glass lids (with steam holes) an absolute essential – I’ve never understood why someone would NOT want to see in the pan!

The saucepan has pouring lips on both sides making it suitable for left or right handed cooks and the strainer lid is, frankly, an excellent idea. Cooking pasta for one in this pan, the strainer lid meant that I didn’t have to dirty a colander in order to drain my pasta. Simply swivel the lid to line up the coarse holes with the lip and pour the water out – job done. I don’t think I’ve seen this on saucepan before and now that I have, I find it remarkable that it’s not more widespread.

The stockpot has so far been used for cooking pasta. I like to use a generous amount of water and the stockpot is a lovely change from the small 70s pan! I think it would handle pasta for up to about 4 quite comfortably. I’ve also made a curry (recipe to come) and a bolognese sauce in the stockpot. It gets a HUGE tick from me for being big enough to cook generous quantities in while still fitting in the dishwasher.

The frying pan, with its lovely high sides, is perfect for cooking small stirfries or scrambled eggs for two. I imagine it would also be very good for risotto (having a greater surface area means the rice will cook more quickly) and, if you ever need a bit of quick deep frying, I think this frying pan would come to your rescue.

As someone who agonises over pan buying, I’m quite happy to say that these are quality products and that the set is well thought it. It would be a generous gift for someone who was just moving out of home and is a great options for couples looking to upgrade some knackered cookware.

And the best part? Well, you can win your own set of CS Kochsysteme cookware. All you have to do is like the Eating Adelaide Facebook page and (optionally – but it is an extra entry) share the competition post that’s pinned to the top. Just make sure you fill in the form below.

This competition is only open to Australian residents and I will verify entries. I’ll email the winner who will have 48 hours to get in touch before I redraw.