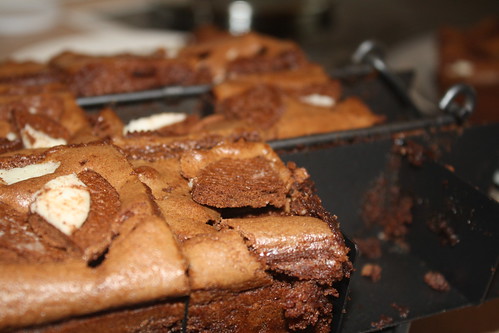 It’s been a long time since I made any brownies but in the last week or so the planets aligned and gave me the opportunity to try out another recipe AND a new dedicated brownie pan.

Normally my brownies are cooked in an old, battered roasting tin lined with baking paper. It’s the perfect size for most recipes and it does a fab job. However, one of my friends has been on at me for quite a while to try out one of the many specialist brownie pans available. The idea with these pans is that they create extra edges so you get more corner pieces (and they, after all, are the best bits).

The one I bought was a cheapie from a chain store and it wasn’t entirely successful (thanks to another friend who very patiently fished out the brownies!) BUT I also didn’t read the instructions and I think there are ways I could improve things. Once I’ve discovered that one way or the other I’ll let you know.

Lorraine Pascale is a British model turned pastry chef (one of the weirder job transitions, I have to say!) and she now hosts tv shows and writes books. I do find her tv programmes a little too lifestyle-like for me (soft music, shots of her working at her computer while something bakes …) but a lot of the recipes have seemed really good and I think her programme is the ONLY time I’ve seen a fougasse cooked on tv.

For these brownies I used Delta Creams, though you could really use any chocolate biscuit you like, or perhaps substitute one of the many biscuit based chocolate bars. Or just leave it out altogether – the brownie mix is perfectly rich and delicious without the addition of biscuits! (I bought it from Clouston and Hall but they no longer have it).

Mary Berry is a UK baking icon and co-hosts the original Great British Bake Off. I hope she’s not offended by me saying she’s a very grandmotherly type. Both my grandmas were pretty good cooks and I certainly didn’t go short of sweet and savoury treats. But if you didn’t have a grandma who baked then one episode of Bake Off and you’d probably be interested in adopting Mary Berry.

I spent quite a bit of time reading through the book deciding what to cook first. A reasonably impromptu Father’s Day lunch saw me volunteer desserts and, realising I was short of time, I decided on the brownies because they looked really easy.

It turned out that time was even more of the essence than I’d realised because, on the morning of lunch, with brownies yet to make and the other dessert to assemble, one of our neighbours popped his head over the fence and the already tight schedule was thrown out of whack!

These brownies taste great with a deep chocolate flavour, are slightly squishy and fudgy and are really easy. If you’re not confident melting chocolate, you want a store cupboard alternative or you want a quick recipe (you still need 40 minutes baking time though!) then this is the recipe for you.

A couple of notes: don’t be freaked out by what feel like unconventional quantities of ingredients. Hold your nerve! Mary Berry’s original recipe uses 375g caster sugar but I had only 300g left and topped up with dark brown sugar. This is always a result in brownies and adds extra richness. I can’t believe that the last lot of brownies I made was back in September last year. Those chocolate and pistachio brownies got a big tick from my brownie taste panel but did rather freak me out on account of the huge amounts of sugar.

Every now and then I catch Justine Schofield’s Everyday Gourmet and it was on that program I saw these marbled chocolate brownies.

There’s not too much different about the brownies, but they have a cream cheese topping which is used to give a very pretty marbled effect. Perfect for people like me who are far too lazy and inept to produce beautifully decorated desserts!

Preheat your oven to 180°C and line a small baking pan with baking paper.

On the stove, in a large pan, melt 125g unsalted butter with 125g dark chocolate and 1 up of brown sugar. If this was just chocolate and butter I would normally do this in the microwave, but here the idea is to get the sugar completely melted, so there’s no graininess in the mixture. You need to be patient and do this over a low heat, with plenty of stirring and monitoring. No wandering off!

Once the sugar is fully dissolved, remove the pan from the heat and mix in ⅓ cup of plain flour, ⅓ cup of cocoa (not drinking chocolate!), ½ tsp of baking powder and 3 eggs. If you are doing this by hand (which I did, for a change!) it will pay to give the eggs a light beating before mixing them in. The mixture will look very very loose – but don’t be alarmed, keep beating and it will thicken up as the chocolate cools and the eggs get incorporated.

Pour the brownie mix into the prepared baking tin.

Now, for your cream cheese topping. The original recipe calls for a branded light, spreadable, cream cheese. Normally, I eschew anything dairy that’s “light” but because cream cheese can be very stiff I did actually buy the spreadable light cream cheese*. Mix 250g of the cream cheese with 1 egg and ¼ cup of caster sugar. I actually found this made too much topping – it’s a shame it’s not possible to halve an egg!

Finish by baking for 35-40 minutes (40 minutes in our oven), until cooked but still moist.

Allow to cool before cutting into portions. The Everyday Gourmet recipe says it makes 24 but that would be 24 tiny brownies for chocolate hating, not hungry types! I say it makes about 12!

The brown sugar makes for a lovely depth of flavour, the brownies are fudgy, they look stunning and the topping makes a slightly tart counterpoint to the sweetness of the brownies.

Excellent stuff. Even if you don’t fancy fiddling with your favourite brownie recipe, just try adding the topping!

* I was relieved, after reading the ingredients, they actually seemed to be innocuous – quite often all manner of interesting additives are used to replicate the mouth feel and weight of the fat that has been removed.