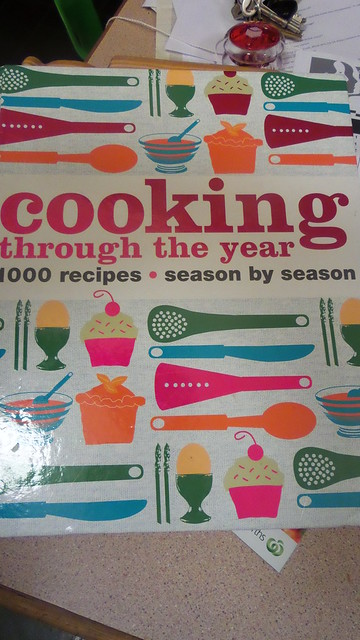 I’m ludicrously tardy in posting this recipe … the book from which it comes is due back at the library today (even after an extension) and Spring has landed here in Adelaide.  But yesterday’s wild and woolly weather reminded us that we are not quite out of the woods and there might yet be a chance to indulge in a bit of slow cooking.

The recipe comes from Cooking Through the Year

. It’s a big book: big in dimensions, a solid cover and hefty. It is densely packed with recipes that are divided by season, with Summer and Winter both being split in two. Each section has a ‘recipe chooser’ covering vegetables, fruit, seafood and meat, as well as an overview of produce at its best at that time of year. It is an English book so not everything listed is going to be readily available (guinea fowl is pretty hard to come by as a rule, and the fish selections are, necessarily, regional) but it will give you an excellent starting point for creating interesting, seasonal dishes.

This is the type of recipe book I love. Lots of recipes: four to six recipes on a double page and light on pictures. This doesn’t mean there are no pictures – it’s just that the beautiful images there are are generally well chosen and add something to the recipe. Where the book is, appropriately, image heavy is in the instructive sections. There are clear shots of different types of lettuce or cherries or squash and step by step photos for butterflying a leg of lamb. The book is published by DK which always seems to have incredibly high production standards, so the paper is smooth and thick and the layout is easy to read.

So I feel I’m doing this book a disservice by having tried only one of its 1000 recipes but a scary back log of blog posts means that we’ll have to make do.

I chose the smoky aubergine and lamb stew because it was simple, one-pot-ish and used Sherry vinegar and we have some left over dry Sherry hiding in a cupboard. The recipe contains lots of our favourite ingredients (cumin, chickpeas, chorizo) and it would be the perfect thing to make early in the week for a complete meal on one of the days I work.

And it did not disappoint. One mistake I did make was that, so keen was I to not overcook the aubergine and turn it to mush, I slightly undercooked it.  Andy, who is not a mushy aubergine fan, said he preferred it that way, but had I been serving it to others I definitely would have cooked it a little longer.

I don’t consider this dish ‘one-pot’ as you have brown the lamb and so dirty a plate but it is easy and you don’t need to worry too much about complicated sides.  The book suggests couscous but you could easily go with mash, pasta or even a salad.  Naturally, left overs were marvellous for both lunch and a small, hungry person’s dinner. 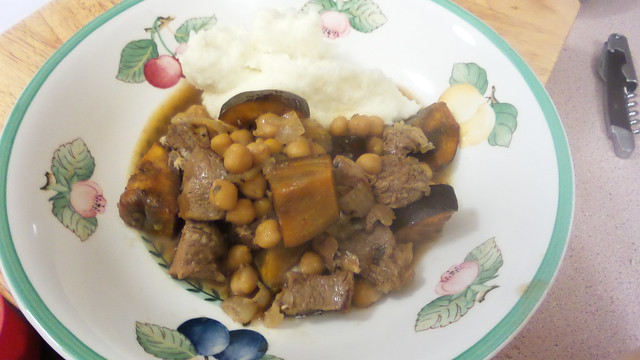 Well, Adelaide’s cool weather appears to have disappeared for a while, but our friends in the northern hemisphere are freezing their little tootsies off, so at least some readers should have an immediate use for this recipe. The rest of us can save it up until the next cool snap.

As you may have gathered, I have loads of cookbooks and while they’ve all been read they have not necessarily all been cooked from, and even those that have are not used on as regular basis as they could be. Phil Vickery’s Britain: The Cookbook

was a gift (if you ever give me a book as a gift, please do write in it!) that has been utterly neglected.

I chose this recipe for several reasons – it looked hearty, it looked simple and it was in the Beer chapter, which Vickery bases around the beers of the Shepherd Neame brewery in Kent. I lived in Rochester, Kent for 9 months and it was while living there that I developed my taste for real ale and went to my first beer festival. I have a soft spot for all things Kentish, bar Morris dancing.

This recipe is perfect for those of you who have a small person (or persons) underfoot because it is so quick to assemble. Like all stews, it requires time on the stove so you won’t be able to knock it up in half an hour for dinner. Make it on a Sunday and save it up for a mid week supper.

The quantities that follow (altered slightly from the book) served 2 adults for dinner (one had a generous second helping), a small person for two meals and also had enough left over for one lunch.

Take a big pan, place it on the stove and add approximately 500g of diced beef (I used diced blade, the book suggests chuck steak). Have some faith at this point because you are NOT going to brown the meat.

Keep on adding … some stock (I used one of those little stock pots, use stock paste, use a stock cube … you get the idea), 300mL water, a small (330mL) bottle of lager (I used Bitburger because that’s what was in the house – if you can get your hands on a real winter ale, that’s what you should use!), 2 carrots, peeled and chopped, 1 large onion, peeled and finely sliced and 2 tbsp of tomato purée. Add plenty of salt and pepper, give it all a good mix and bring to the boil. Once the mix is boiling, reduce the heat and cook at almost a simmer for 2 or so hours. DON’T cook it too vigorously or the meat will dry out and toughen up.

While all this simmering is going on, preheat the grill and grill 4 large Swiss Brown mushrooms. You want to help them dry out so grill them on one side for a bit and then turn them over. You may need to lightly brush them with oil (if your grill pan has not just been used for cooking bacon!). Cut the grilled mushrooms into thick slices and stir into the stew.

Finish the stew by making a beurre manié: a mixture of softened butter (don’t forget, a quick blast in the microwave will help you here!) and plain flour.

That, seriously, is it.

I was really worried – no browning of the meat, no herbs or spices … I thought it would be tasteless and nasty. Which just goes to show how wrong I was! It was delicious, hearty and solved a good few meal problems. As Vickery suggests, we served with plenty of mashed potato and some roasted parsnips.

Yet again, proof that you don’t need to throw everything in the cupboard into the pot to make a tasty meal!