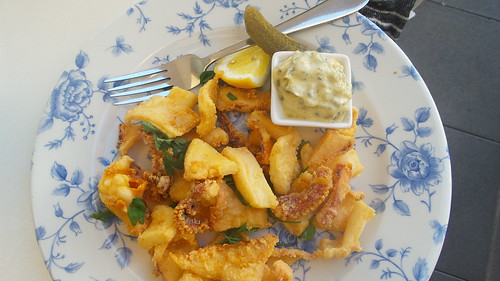 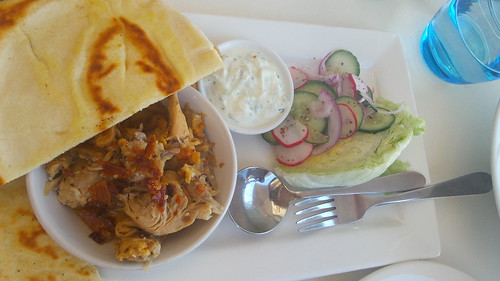 With winter retreating, albeit very slowly, it’s time to start thinking about ways to use the BBQ. We were actually trawling some cookbooks looking for a hearty, warming dinner before we realised that actually we didn’t feel like a big pie or casserole. Something lighter and quicker was definitely in order.

Elizabeth David’s A Book of Mediterranean Food* provided inspiration in the form of her recipe for the Greek classic arni souvlaki. This is another great example of needing a recipe to keep things simple … because I know that, given a pile of lamb to marinate, I’d end up using most of the spices in the spice drawer – whereas in this case I used just the one.

David’s recipe doesn’t specify any quantities but I used (approximately) the following. We had about 600g of diced lamb to which I added the juice of two smallish lemons and about 2 tsp of oregano (she specifies rigani and substitutes marjoram). I gave it a good mix and finished off with plenty of pepper and a little salt. That was it. Oregano, lemon juice, salt and pepper. Let’s face it, sourcing the lamb is going to be the most difficult part of this dish.

The mix only needs to be left for about half an hour. If you’re aiming for a more authentic Greek dish, you can thread the lamb on to skewers, but if you want quick, then just fire up the BBQ. Once it’s good and hot, throw the lamb on, grill it and you’re good to go.

The lamb cooks quickly and it should be reasonably tender (depending on cut, I guess) and you get a lovely herby, lemony, grill flavour. It’s not cluttered – just simple flavours that marry together well.

Of course, such a simple, quick dish needs a simple, quick accompaniment. For something with a mediterranean flavour we opted for couscous. Add a cup and a half of boiling water to the same amount of couscous, stir it through and cover. Then, I coarsely chopped an onion and fried it off with a very large clove of garlic. When it was softened I added a chopped red capsicum to the pan and turned off the heat.

Mix some good quality olive oil and butter through the couscous – you might need to put it back on the heat – and then add in the capsicum and onion mix. I finished with a generous handful of parsley and mixed through a small amount of crushed chilli, a teaspoon of ground cumin and a generous sprinkling of sumac.

All far far too easy and, best of all, very tasty – we’ll definitely be serving this at our next BBQ. And don’t worry about cooking too much and having leftovers – it’s tasty even reheated in a microwave the next day for lunch!

or from The Book Depository for world wide delivery.