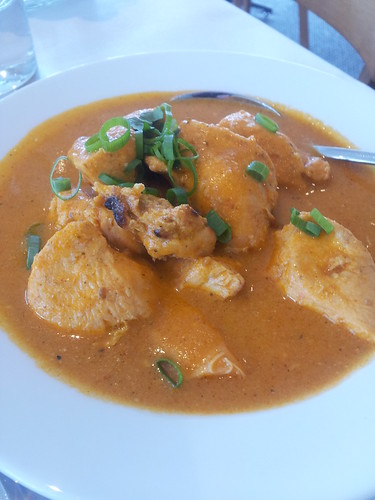 Yes – that ‘date of visit’ is almost TWO months ago. What on earth have I been doing? Hmmm, I’m not quite sure but anyway, let’s make up for lost time.

The Hub Tandoor is the latest addition to the Aberfoyle Hub shopping centre. It has taken over the building that used to house a Pizza Hut. Now, you can spot it thanks to the colourful Buddhist prayer flags and huge windows. There is ample parking which is separate from that used for the nearby Coles – which has to be a huge bonus for the restaurant.

We headed there for an early Sunday dinner and while we might have been the first people there (arriving between 5 and 5:30pm!) while we eat other tables arrived and there was also a good takeaway trade happening.

The restaurant is quite small with well spaced out tables and proper linen. Being so early we had our choice of seats (always a paralysing decision to make!) and set around to ordering straight away. For the toddler we ordered the khaja misayko (mixed platter of entrées), Andy ordered the prawn curry (jhingey maachar johl) and I opted for the bahdami kukhura (tandoor roasted chicken with a tomato and onion sauce). Unfortunately I didn’t take a photo of the toddler’s mixed platter, because it was very pretty and, of the bits we were allowed to eat, very tasty. The toddler very much enjoyed the sekuwa (effectively a Nepalese chicken tikka) as well as the filling from the dumplings but he also tucked into his father’s prawn curry. Normally, he won’t touch prawns with a barge pole …

My choice (mistakenly chosen because I thought the toddler might like it) was a bit disappointing. The creamy tomato and onion gravy was really a bit too mild and sweet for me but this would be perfect for anyone who is not into curries that are either spicy hot or just spicy. Andy definitely won with his prawn curry which, while not chilli hot, had loads of flavour.

Service was friendly (something you always notice with a child in tow!) and also efficient. As an added bonus, The Hub Tandoor is also relatively cheap. The main courses mostly come in under $15!

As I’ve said before, if you think you don’t like curry, I really recommend giving Nepalese food a go. The Hub Tandoor is a great place to start and we made sure we left with a takeaway menu.